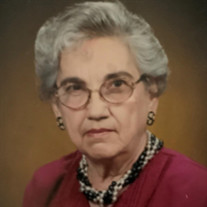 Virginia Manuela de Rueda Piñón passed away at the age of 95 at her daughter’s home in Harrah,OK surrounded by family members. She died peacefully under the care of Centric Home Health and Hospice. She was born to Ciria Dougherty and José Maria deRueda where she was raised in Granjeno, TX until the age of 17. Due to the death of her father when she was 17 she and her mother moved to Mission,TX. As a sole provider for her mother and self she learned to advocate for women’s rights to be allowed work in the male dominate fields of employment. At the age of 21 she met and married Ines Piñón. Together they had 7 children. During their 74 yrs of marriage they lived in several places in Texas & Chandler, AZ. In each area that she lived, she was extremely active in her communities and church organizations making a difference to the people she served. She was elected as a Democratic representative for her precinct in Chandler AZ; she established an after school program for underprivileged children in Chandler AZ, where she was also a dedicated teacher aide. She attended the Latin America Church of the Nazarene, Chandler, AZ sharing her love of Christ with children in her Sunday School classes giving them a perspective of their true potential as children of God. She was a member of the Iglesia Bautista Tierra Prometida in McAllen, TX for many years until she was no longer able to attend due to illness. She was a strong willed and out spoken woman determined to make a difference in how women were perceived in her generation and culture. She comes from a long linage of Tejanos (Dougherty and de Ruedas) and Texan Pioneers. She was proceed in death by her husband Ines Piñón (98), infant son Ascención, grandson Reggie Haynes Jr, and son-in-laws Keary Nield & Reggie Haynes. She has 6 surviving children: Diana Nield, Pleasant Grove, UT; Joe M. Mission,TX; Linda Wyatt (Rodney) Harrah OK; Joel Daniel (Karen), Gilbert, AZ; Judy Ann Haynes, Phoenix, AZ; Lauro “Larry” Mission, TX, and foster son Don Pham, Boston, MD; 16 grand children and 26 great-grand children. Per her request a graveside ceremony will be conducted June 6th at 10 am at the Granjeno Cemetery, where she will be laid to rest beside her parents, grandparents, aunts, uncles & cousins. Pastor Caleb Garcia, Iglesia Bautista Tierra Prometida willl officate. Ric Brown Funeral Home, Mission will be in charge of the burial.

Virginia Manuela de Rueda Piñón passed away at the age of 95 at her daughter&#8217;s home in Harrah,OK surrounded by family members. She died peacefully under the care of Centric Home Health and Hospice. She was born to Ciria Dougherty and... View Obituary & Service Information

The family of Virginia Pinon created this Life Tributes page to make it easy to share your memories.