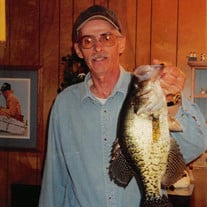 Robert L. Curtis, 80, passed away on April 9, 2022, at Mission Regional Hospital in Mission, Texas He was born in Clinton, Iowa, on November 23, 1941. Throughout his life he loved being an outdoorsman, with fishing being one of his main sources of enjoyment. His love for the sport took him many places but mostly to Wisconsin, Minnesota, Illinois, Canada and of course his fondest place being anywhere along the Mississippi River in Iowa. He had many great stories about his adventures starting from early childhood through his entire life and was happy to share them with his many friends through the years. Some of his other talents led him to motorcycle racing when he was young and he also was an excellent pool player, participating in many pool tournaments in Iowa. Most recently he took up the art of wood working, building and very ornately painting numerous bird houses for his family and friends. Bob proudly served active duty in the US Army from 1964-1966, in the 8th Army Pathfinders Division stationed in Germany, finishing his active duty in the National Guard in 1968. After his honorable discharge from the Army he began working at Lord Baltimore Press/International Paper Company in Clinton, IA, and continued to work there for 37 years until he retired in 1999. Bob and his wife purchased a home in Mission, TX in 2011 and became full time resident there in 2017. No services will be held at this time. A memorial service will be held in Iowa at a later date. The family request that memorials be sent to Mississippi River Eco Tourism Center, 3942 291st Street, Camanche, Iowa 52730 He is survived by his wife of 52 years, A. Lynn Curtis Son, James Curtis (wife Janet), Baileyville, Illinois Son, Virgil Fisher, Sun Lakes, Arizona Daughter, Teresa Nelson, University Place, Washington Sister, Bonnie Pappas, Marshalltown, Iowa Sister, Suzanne North, Mountain Home, Arkansas Grandchildren: Jennifer Curtis, Jason Curtis, Jason Cooper, Jimmy Cooper, Jeffery Cooper Great Grandchildren: Aubree Curtis Preceded in death by: Mother, Marie Minnihan (Petersen), Father, Frank Minnihan, Brother, Richard Curtis, Daughter, Linda cooper (Curtis), Grandson, Justin Cooper.

Robert L. Curtis, 80, passed away on April 9, 2022, at Mission Regional Hospital in Mission, Texas He was born in Clinton, Iowa, on November 23, 1941. Throughout his life he loved being an outdoorsman, with fishing being one of his main sources... View Obituary & Service Information

The family of Robert Leonard Curtis created this Life Tributes page to make it easy to share your memories.