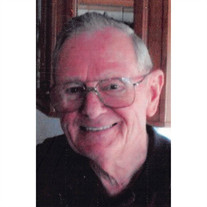 MISSION, TX - Bob was born September 16, 1933 in Hannibal, Mo. The son of Elbert William Yount?and Lula Mae Stowers?Yount?who preceded him in death. He was also preceded in death by his son David (Barbara)?Yount, grandson Marshall?Yount, daughter-in-law Roxann (Daniel)?Yount, and brother Jerry McDonald. Bob passed away October 11, 2020. He grew up in and around Hannibal, Mo. Attending Eugene Field School and Hannibal High School, graduating with the class of 1951. He married Patricia Wichern on June 6, 1954 and she survives him. Also surviving are his son Daniel of Walnut Cove, NC and daughter Deborah of Kernersville, NC. Grandchildren: Jennifer Del Real, Lucas and Silas?Yount, Justin (Savanna)?Yount, Brad and Angie Little, 10 great grandchildren, his brothers Richard and Chester McDonald, and Hap?Yount. Bob retired in 1990, having worked as a driver for Pilot Freight Carriers for 33 years. He then drove a school bus for 5 years with the Forsyth County NC School System. Bob and Pat spent the next 18 years full time RV'ing, eventually visiting all 50 of the United States, all Canadian Provinces, and about two thirds of the states of Mexico. They also did a motor home tour of Germany, Austria, and Switzerland in the year 2000. Their winters were spent in Mission TX where they eventually settled in 2013. Here they made many good friends, enjoyed square dancing, playing cards, and many other activities. Donations may be made in Bob's memory to: The Victory Junction Camp, 4500 Adam's way, Randleman NC, or The Men's Bible Class, Kernersville Moravian Church, 504 S. Main St, Kernersville, NC 27284 or The First Presbyterian Church, 1102 Ash, Mission Tx 78572.

The family of Robert "Bob" Yount created this Life Tributes page to make it easy to share your memories.