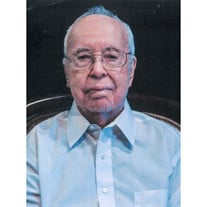 MISSION - Robert Wicks, 93, passed away on April 12, 2019 at McAllen Medical Center. He was born on March 7, 1926 in Houston, TX to Albert and Maude Wicks. He was a lifelong resident of Mission, having moved when he was 6 months old. After graduating from Edinburg High School in 1942, he attended Edinburg Jr. College, UT Austin, and Baylor University where he received a BA in History, Bible and English, later he attended Texas A & I University and received an MA in Education. Bob served as a Quartermaster to a seaplane tender during WWII in the US Navy from 1944-1946. Bob had a 44 year career with Mission CISD and saw it go from 3 elementary campuses to 10 elementary campuses. He served in several positions including Classroom Teacher, Principal, Business Manager, as well as Assistant Superintendent for Business and Finance. Bob was a Charter Member of 1955 of Conway Avenue Baptist Church where he served as a deacon, song leader, Sunday School Class teacher and designed many floats for the Texas Citrus Parade. Bob was very involved in the community, and received many awards including Mission Man of the Year, Mr. Mission, Friend of Education Award, School Administrator of the Year, and being a long time Rotary Member having received a Paul Harris Fellowship. He was preceded in death by his wife Marie Ellen Young Wicks in 1996; brother Albert Warner Wicks; as well as by his parents. He is survived by wife Arthena Jo Cochran; daughters Sue Ellen (Gene) West, Kathy (Henry) Hinojosa; grandchildren Rick Hinojosa, Tricia Hinojosa (Kevin) Bergan, Michael (Kayla) West, Danny (Cassie) Hinojosa, Charles (Amanda) West; 3 great grandchildren Kylah and Maddon Bergan, and Charles Aiden West; sister Jo Mae London; and sister-in-law Dorothy Wicks. The family would like to extend a special debt of gratitude to his caregiver Linda Gonzalez, who stayed with him until the very end. In lieu of flowers, donations may be made to Conway Avenue Baptist Church or a charity of your choice. Visitation will be held on Tuesday, April 16, 2019, from 5-7pm at Ric Brown Family Funeral Home Chapel in Mission. A funeral will be held on Wednesday, April 17, 2019, at 10 at Ric Brown Family Funeral Home Chapel in Mission. A private burial will follow. Services are under the direction of Ric Brown Family Funeral Home in Mission.

MISSION - Robert Wicks, 93, passed away on April 12, 2019 at McAllen Medical Center. He was born on March 7, 1926 in Houston, TX to Albert and Maude Wicks. He was a lifelong resident of Mission, having moved when he was 6 months old. After graduating... View Obituary & Service Information

The family of Robert Wicks created this Life Tributes page to make it easy to share your memories.