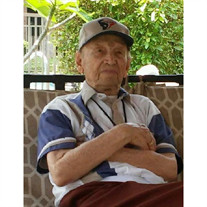 MCALLEN - Robert William "Bob" Westerman, Jr. was born in Houston, Texas on October 7, 1926, to Robert William Westerman, Sr, and Mildred Carol Young Westerman. He entered into eternal peace on April 26, 2020. A loving husband, father, grandfather, great grandfather, great-great grandfather, and friend to many. Bob was otherwise known as "Pocky", named by his first grandson. Bob enjoyed sports of every type, being a very avid baseball enthusiast, playing "Form League" and coaching "Little League and Babe Ruth" baseball with young people for many years. He was always involved in his kids, grandkids, great grandkids and even great-great grandkids lives and activities, going to as many events as he could. Bob enjoyed and played golf everywhere he traveled, and even made a "hole-in-one" in a tournament and marshalled at many Houston Open Golf Tournaments. He was president of the Bowler's League and received many honors in bowling. He loved to fish and always expected to catch the "Big One", and he finally did, a 30 pound Redfish in Laguna Madre when he was 86. Bob enjoyed his gardening, yard and flowers, but especially his pecan trees, always at odds with the squirrels. He was a faithful husband to his wife of nearly 73 years, supporting her interest and career. Bob was known as an outgoing, social man, never meeting a stranger, which made him the perfect salesman working for; Baash-Ross Drilling Equipment, Joy Manufacturing, Wheatly Valve and Linn International, all oil, gas and drilling equipment manufacturing companies. He served in the Army Air Corp in WWII and Korean War. Robert was married on June 14, 1947 to his loving wife of 72 years, Zada Christine King Westerman, preceding him in death. Robert was also preceded in death by his son, Robert "Rob" W. Westerman, III, Sister Rose Marie Hall and Brother Donald Wayne Westerman. Robert is survived by his sons Christopher Westerman, Terry Westerman and wife Nelda. He is also survived by six grandchildren, Shane Westerman, Jamy Westerman, Nikki Schinderwolf, Amie Bennett, Sara Gunnels, Kelly Serda, Tamara Tijerina and many nieces and nephews. He was also blessed having twenty two great-grandchildren, and two great-great grandchildren. The family wishes to thank Heritage Village Retirement Community and McAllen Medical Center and everyone else who loved, cared for and supported Bob in the past years, with our greatest and warmest gratitude. A family memorial service celebrating his life will be held on Saturday, May 9th, 2020, at 1:00 PM at Ric Brown Family Funeral Home, 621 East Griffin Parkway, Mission, Texas 78572. Interment will follow at a later date at the Texas State Veterans Cemetery, S. Inspiration Road, Mission, Texas. Due to the COVID-19 virus rules and regulations there will be no viewing and the memorial service is restricted to family.

The family of Robert William Westerman created this Life Tributes page to make it easy to share your memories.