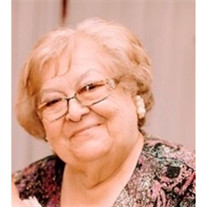 MISSION - Maria de la Luz Vicinaiz entered heaven on September 14, 2019 and was at long last reunited with her husband and long departed son, Virgil. Luz was born on January 15, 1935 on the Mundo Margo Ranch, Starr County, Texas. She was raised in the ranchlands of Northern Starr County, attended school in San Isidro and graduated in 1955. Thereafter, and in 1956 she moved to McAllen to live with her Soto relatives and work as a teacher's aide at, the then new, Sacred Heart Catholic school. She met the love of her life, Vicente Vicinaiz, in 1956 who she married in 1957. They lived in Brownsville where their four children were born. In 1961, homesick Luz moved the family to San Isidro where they lived until 1980. They then lived in McAllen, and most recently Mission. After marriage she stayed home to care for her children and husband. She was a talented seamstress and enjoyed arts and crafts. She was always very actively involved in her children's schooling and extracurricular activities. She was the best Cub Scout, Band, 4-H and F.H.A. adult leader. She always had an encouraging word and dispensed both a tongue lashing and good advice liberally. Although her husband and her children all had college degrees and she had none, the consensus was that her native intelligence and common sense equaled if not surpassed any of our degrees. After her husband retired, they enjoyed spending time with each other and traveling to visit their children and grandchildren. While her husband enjoyed ranching during his retirement years, Luz spent several years as a high school substitute teacher in Sharyland. She was very proud of her children and grandchildren and played a very special part in each of their lives. The family extends a very special "Thank You!" to her daughters. After the sudden and unexpected death of her husband in 2016 Luz's health declined. In 2016 her daughter Velina put her life on hold and moved down from Michigan to care for our mother. In June of this year and after her son Charlie completed high school Vanessa also moved down from the Dallas area to do the same. They both sacrificed their own needs and worked tirelessly to live with and assist our mother. It was through their efforts that in the twilight of her years Mother enjoyed the highest quality of life possible. Luz was preceded in death by her youngest son, Virgil Vito Vicinaiz, parents Pedro and Jesusa, her brothers Jose, Pablo Federico (Maria Lilia) and Refugio Trevino (Antonia), sisters Guadalupe Villarreal (Dr. Elias Villarreal) and Josefina Trevino, niece Dana Trevino Ramirez and nephew Ivan Vicinaiz. Luz is survived by her daughters Velina Celeste Holler (Jeffrey), Vanessa Vidette Joiner and son Victor Vincent Vicinaiz (Ileana) and her sister Carmela Longoria (Juan Luis). Luz is also survived by her grandchildren Johnathan Dee Holler, Victor Vincent Vicinaiz II, Sara Isabel Vicinaiz (Erik Anderson) and Charles Vincent Joiner and numerous nieces and nephews. Pallbearers will be her nephews Pablo Trevino Jr., Pedro Alfonso Trevino, Refugio Trevino Jr., Jose Trevino, Melecio Longoria, Juan Luis Longoria Jr. and Elias Villarreal, Jr. Visitation will be held at Ric Brown Family Funeral Home on Tuesday, September 17 from 1pm to 9pm with a 7pm rosary. Funeral service will be at 12pm on Wednesday, September 18 at Our Lady of Guadalupe Catholic Church in Mission with Father Roy Snipes conducting the mass. Interment will follow at Valley Memorial Gardens Cemetery. Services were entrusted to Ric Brown Family Funeral Home of Mission.

The family of Maria Luz Vicinaiz created this Life Tributes page to make it easy to share your memories.