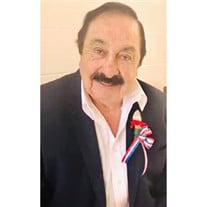 MISSION - On October 27, 2019 surrounded by family, Ramiro Vela went home to be with our Heavenly Father at the age of 87. Ramiro was born on August 10, 1932 to Bonifacio and Carolina Vela, and was raised in Mission Texas. He later moved to Palmview where he was one of the original founders of the City. In 1951 Ramiro answered the call of duty to our country and left home to serve in the United States Air Force, he was honorably discharged in 1955. Upon his return from his military service he married Hermila Guerra on July 24, 1955, and they were happily married for forty years until her death in 1995. Together they had three daughters, Norma Vela-Segovia ( Raymundo), Cynthia Vela, and Debra Vela (Esiquio). One of Ramiro's joys in life were the special moments that he would spend with his daughters, grandchildren, and great grandchildren. He loved his family functions and especially his "Sunday bbq's where he enjoyed the smell of mesquite burning, music, and un "pisto". "Grandpa," was the name he was lovingly referred to, not only by his grandchildren but also by so many friends and family. "Grandpa" was always the life of the party, the dancer, mover, and shaker. He was a jokester, a caregiver, and most importantly a man of faith and family. His home and "La Cochera" were always open to friends and family who would stop by often to visit. He always would lovingly say "God bless you and your family" as each visitor departed home. Grandpa loved helping others and did so for many years. He loved the City of Palmview, a community that he was dedicated to, as a public servant most of his life, where he served Palmview as Mayor, Alderman, and an EDC board member. In 2015, Ramiro was honored for his public service by the City of Palmview and was placed in the "Rio Grande Valley Walk of Fame". He was also the commander of the Catholic War Veterans Post 1065 (1962-63) and an active member of the American Legion for many years. Throughout his life he was an active member of Our Lady of Guadalupe Church, where he often attended daily mass and would always in good times and in bad make daily "visitas" where he would sit and thank God for his many blessings. He always believed in treating everyone with respect and lived by the golden rule of "Treating others the way you want to be treated." His legacy of Life, Love, Faith and Service will live on forever through his daughters, grandchildren, and great grandchildren. Later in life, Ramiro was remarried to Maria Vela on February 12, 2010, he had two stepdaughters, Carmen Montalvo (Jesus) and Daisy Cantu (Rosbel Muniz). Ramiro was also blessed with eight brothers and sisters; Inocencia Vela, Carolina Trevino (Jesus), Reynaldo Vela (Aurora), Amparo Barbosa ( Rafael), Lydia Rodriguez( Israel) Raul Vela (Lydia), Roberto Vela (Irma), and Rogelio Vela (Marianela). Ramiro is survived by 15 grandchildren, 14 great-grandchildren, multiple nieces, nephews, friends, and the entire community he impacted during his life. Services are under the direction of Ric Brown Family Funeral Home, Mission Texas. Visitation will take place on Tuesday, October 29th, 2019 from 2:00pm -5:30 p.m. at Ric Brown Family Funeral Home with rosary to be held at 7pm at Our Lady of Guadalupe Catholic Church. Visitation will continue on Wednesday October 30th from 8:30 am - 12:00 pm. A funeral mass will be celebrated in his honor at 12:30 pm at Our Lady of Guadalupe Catholic Church Mission, Texas, with burial to follow at the Veterans Cemetery of the Rio Grande Valley. Services are under the direction of Ric Brown Family Funeral Home of Mission.

MISSION - On October 27, 2019 surrounded by family, Ramiro Vela went home to be with our Heavenly Father at the age of 87. Ramiro was born on August 10, 1932 to Bonifacio and Carolina Vela, and was raised in Mission Texas. He later moved to... View Obituary & Service Information

The family of Ramiro Vela created this Life Tributes page to make it easy to share your memories.