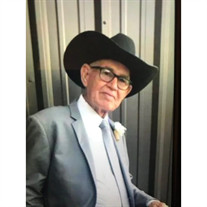 MISSION - Jose?B. "Peco"?Trevino, passed away December 9th, 2020 at Mission Regional Medical Center.?Jose?was born September 20th, 1933 in Mission, TX to the late Alfredo and Prudencia B.?Trevino. He married Paula Salinas on October 10th, 1954 at Our Lady of Guadalupe Catholic Church in Mission, TX. She preceded him in death on January 26th, 1975. He always carried a picture in his wallet of his loving wife "Pola", as he called her. He was later blessed to find love again and married Juanita Contreras on December 24th, 1994. She became his lifelong companion and she survives. Jose?worked construction as a maintainer operator most of his life, retiring at age 75. After traveling for work he would often bring gifts to his children, whom he dearly loved. He was a proud grandfather of twenty-six grandchildren, twenty-four great grandchildren, and one great-great grandchild. He loved gathering with family and friends where he would share stories and sing along to mariachi music. He was a fan of Pedro Infante and enjoyed watching his movies and listening to his music. He will be remembered as a kind and caring man who was a wonderful role model for all. Jose?is survived by his brother, Federico?Trevino, five daughters - Veronica Garcia (Jose), Susanna?Trevino, Idolina Contreras (Rosendo Jr.), Maricela Zamarron, and Rebecca?Trevino?(John), five sons -?Jose?Alfredo?Trevino, Agapito?Trevino, David?Trevino, Felipe?Trevino, and Victor?Trevino. Jose?is preceded in death by his parents, two brothers - Paulo and Luis?Trevino, and three sisters - Adela Ramirez, Ernestina Buentello, and Benita Garza. Funeral services were held on Monday, December 14th at Ric Brown Funeral Home in Mission, TX with burial at San?Jose?Cemetery in Mission, TX.

The family of Jose "Peco" Trevi?o created this Life Tributes page to make it easy to share your memories.