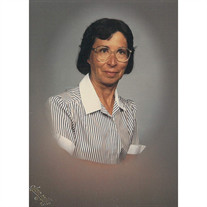 MISSION - Georgia Anna Toney was born September 4, 1929 in Crumps Bottom, West Virginia to George E. Thompson and Dora T. Harman Thompson. At the age of 15 Georgia graduated High School and began her college education. Georgia married Vallie Emerson Toney Jr. and raised 5 children as a stay at home do everything Mom. Being successful in business and domestic careers, Vallie and Georgia retired to South Texas in 1977 where they enjoyed tennis, grandchildren, and the relaxed Valley lifestyle. Georgia, since early in life, had a constant commitment not only to church attendance but to trusting and following Jesus Christ as her personal Lord and Savior. This showed up in her kindness, gentleness, patience and caring that she was always known for. She was a humble person always considering others above herself. Georgia went home to be with the Lord on July 29, 2019. Georgia was preceded in death by her husband, Vallie Emerson Toney, Jr.; her only sister Winnie Louise Segars; and son-in-laws Robert Goekin and John Smith. Georgia is survived by two brothers Bill (Valerie) Toney and Michael Toney. Georgia leaves behind five children Vallie E. (Joyce) Toney III, Victor J. (Pam) Toney, April Goekin, Robert (Stephanie) Toney, and the one who did so much to care for her in later years Vanessa Smith. Georgia also leaves behind 11 grandchildren and 21 great grandchildren. The family would like to extend a special thank you to the staff of The Bridges of Edinburg for the love and care they have given to Georgia. Visitation will be held on Sunday, August 4, 2019, from 5-7pm at Ric Brown Family Funeral Home in Mission. A funeral service will be held on Monday, August 5, 2019, at 9:30am at Ric Brown Family Funeral Home Chapel in Mission. Burial will follow at Rio Grande Valley State Veterans Cemetery in Mission. Services are under the direction of Ric Brown Family Funeral Home in Mission.

The family of Georgia Anna Toney created this Life Tributes page to make it easy to share your memories.