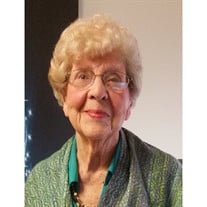 FREDERICKSBURG/MISSION - Dorothy Jacobs Suter, 102, longtime resident of Mission, Texas was called home by the Lord the evening of Thursday, July 25th. Born in Pittsburg, Pennsylvania, Dorothy was the oldest child of Willard and Evelyn Jacobs. Over the years of her youth she helped raise her brothers and sister, Russell, Natalie, Kenneth and Robert. Upon graduating from the Ohio State University in 1941 with a degree in Education, she taught two years in Ohio, then married her college classmate, Ensign Warren Suter in 1943. Living in California during the war, her first son, Thomas was born in 1944. Following the war, Dorothy and Warren went home to Ohio for a year. At the advice of a friend they headed to Mission, Texas, where the friend assured them, "It's a great place to raise a family and they need teachers and architects." Dorothy and Warren joined the First Presbyterian Church, Mission, where Dorothy sang in the choir until she moved to the Hill Country in 2014. She sang for President Dwight Eisenhower in 1953 when he attended a church service. The next 14 years were filled with raising children. Mary was born in 1947. The 1951 polio epidemic took her first son, Tom, aged seven. Her second son, Warren C. Jr. (Chuck) came in 1953. When he was ready for kindergarten, a position as an English teacher was offered her at Mission High School. She accepted, asking that, perhaps, in the future there might be an art course offered, for that was her major field. When the new Mission High School was built in 1963, an Art course was offered. Dorothy became the department head and sole instructor. She held many classes outdoors so students could enjoy the natural beauty the Valley offers. She oversaw the growth of the Art department and the intervening years of her career brought additional classes, new art media and community projects including the "Mission, Home of the Grapefruit" mural downtown and numerous sets for the high school theater groups. Dorothy was also the liaison to AFS, American Field Service where she was responsible for finding a foreign student a family able to take the student in for a year. She was also a faculty sponsor for the Student Counsel. In their retirement, Dorothy and Warren enjoyed travelling with their many close friends from Mission. Warren passed in 2010 and Dorothy moved to Fredericksburg, Texas to be closer to her children. Dorothy enjoyed being and remains a long-time member of PEO Chapter J and Delta Kappa Gamma. Dorothy is survived by her brother Robert Jacobs (Eva), sister-in-law Judy Suter (Norton, deceased), daughter Mary Sandstedt (John), son Warren Suter, Jr. (Sandra Hamlin), grandsons Warren C. (Trey) Suter III and Colby Thomas Suter and numerous nieces and nephews. The family would like to express their gratitude to the staffs of Heritage Place Assisted Living and Hill Country Memorial Hospice, both of Fredericksburg, for their kind and loving support of our mother. Visitation will be held on Thursday, August 15th from 5:30-7:00 pm at Ric Brown Family Funeral Home of Mission. A memorial service will be held on August 16th, Friday at 11:00 am at the First Presbyterian Church in Mission. In lieu of flowers, the family requests donations to the charity of your choice. Services have been entrusted to Ric Brown Family Funeral Home of Mission.

The family of Dorothy Jacobs Suter created this Life Tributes page to make it easy to share your memories.