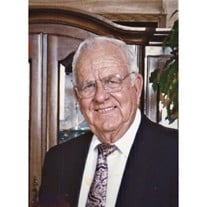 MISSION/PALMHURST - Julian Salinas entered eternal rest on Saturday September 5, 2020 at Briarcliff Nursing & Rehab in McAllen at the age of 90. Julian was born on January 9, 1930 in Mier, Tamps., Mexico. He would later move to Mission, Tx after the death of his mother. Julian married Evangelina Pena on Feb. 18, 1951 and would have celebrated 70 years of marriage this coming year. Julian worked in the meat business all his life, eventually opening up his own company J&E Wholesale Meats, which he later passed on to his son JB. Julian was an extremely hard worker and always trying to better himself. He taught us to be independent and hard workers. He was a faithful member of Our Lady of Guadalupe Church until his age prevented him from driving. Julian was an early riser and you could find him at the Stripes on 3 Mile/Conway along with his buddies having coffee anywhere from 3-5am and would even take his own folding chair. Dad will be greatly missed by all, but we knew he would not survive long without our mother Evangelina "Chole". Julian was preceded in death by his wife Evangelina Pena Salinas on July 16, 2020, his son JB Salinas, his parents Amado and Manuelita Garcia Salinas, his brother Eraclio Salinas and his sister Otila Barrera both of Mission. Julian is survived by his daughters Gloria (Robert) Olivares of McAllen, Martha (Tom) Elkins of Rosenburg, Irma (Jose) Garcia of Beeville and Maria Elva (Oscar) Requenez of Mission. He is also survived by two sisters Janie Saldivar and Ma. Del Refugio "Cooky" Alvarado as well as many grandchildren, great-grandchildren and great-great-grandchildren. Thank you to all the staff and nurses at Briarcliff Nursing who made our parents feel like their own family when we could not be there and to DHR Hospice who always treated them with respect and dignity. Funeral arrangements have been entrusted to Ric Brown Funeral Home of Mission. Visitation will take place from 5-9pm with a rosary at 7pm on Friday Oct. 2nd, 2020. Burial will be on Saturday Oct. 3rd leaving the funeral home at 8am for a blessing at Our Lady of Guadalupe at 8:30am and proceeding to Valley Memorial Gardens in McAllen for burial at 9am.

MISSION/PALMHURST - Julian Salinas entered eternal rest on Saturday September 5, 2020 at Briarcliff Nursing & Rehab in McAllen at the age of 90. Julian was born on January 9, 1930 in Mier, Tamps., Mexico. He would later move to Mission, Tx after... View Obituary & Service Information

The family of Julian Salinas created this Life Tributes page to make it easy to share your memories.