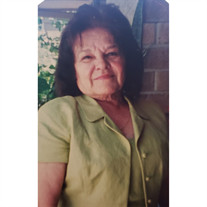 MISSION - Andrea?G.?Salinas?entered the Lord's Kingdom peacefully on September 30, 2020 in Edinburg, Texas at the age of 89. She is preceded in death by her loving husband Eleuterio?Salinas, and her parents Pablo and Lucia Guzman. Andrea?was born?Andrea?Guzman in Linn, Texas on May 1, 1931. She met the love of her life, Eleuterio?Salinas, in Edinburg, Texas before he left to the Army to fight in the Korean Conflict. She was spoiled by Eleuterio from the get-go. He wrote her every single day while in the Army. She often said that on Mondays, she would receive two letters since there was no mail delivery on Sundays. Eleuterio returned safely from Korea and promptly married?Andrea?in 1954. Then their grand adventure began. Eleuterio and?Andrea?settled in Edinburg, Texas in a brand-new house and started a family. It wasn't too long before?Andrea?and Eleuterio moved to the big city of McAllen.?Andrea?had three sons, Frank, Joe, and Homaro exactly five years apart. They traveled, danced and they laughed. Boy did they laugh. In 1979, the Lord called Eleuterio home and?Andrea?showed her true strength. She always sacrificed her own needs for the good of her family. She took on several jobs at a time to make sure her children were provided for. She imposed on her "boys" that an education was everything. She made sure all her sons graduated from college. She was a proud "mama", but what she didn't realize was that her sons were the proud ones. She was the most amazing, kind and compassionate mother. She often said that Eleuterio had given so much love in their time together that it was enough to hold her over until she would dance with him again in Heaven.?Andrea, your wish has been granted. Andrea?loved the Lord and she also loved children which naturally lead her to her chosen path. Throughout her life, she worked for Holy Spirit Catholic Church in McAllen, Texas in the children's daycare center and as a CCD teacher. She continued to teach later at Our Lady of Sorrows Catholic School where she loved to talk about the children and love for the church. Ultimately, she worked for the Summit Sports Club where she managed the children's daycare center for over 20 years until her retirement. Andrea?was blessed and surrounded by a beautiful family of three sons and 3 wonderful daughters-in-law: Frank (Patricia), Joe (Sonya), and Homar (Nereida); 4 grandchildren: Omar (Roxie), Samantha (Mark), Ray David, and Frankie. She loved her 8 great-grandchildren: Evan, Harley, Edward Joe, Rocky, Markie, Sabrina, Sofia, and Haley.?Andrea?is also survived by her beloved dachshund, Toby. Visitation services for this amazing lady will be held at Ric Brown Funeral Home in Mission, Texas on Tuesday, October 6 from 5 p.m. to 9 p.m. with a Rosary at 7:00 p.m. A funeral mass will be celebrated the following day on Wednesday, October 7 at 9:00 a.m. at Our Lady of Guadalupe Catholic Church in Mission, Texas. Services at Rio Grande Valley State Veterans Cemetery will be held at a later date.

MISSION - Andrea?G.?Salinas?entered the Lord's Kingdom peacefully on September 30, 2020 in Edinburg, Texas at the age of 89. She is preceded in death by her loving husband Eleuterio?Salinas, and her parents Pablo and Lucia Guzman. Andrea?was... View Obituary & Service Information

The family of Andrea G. Salinas created this Life Tributes page to make it easy to share your memories.