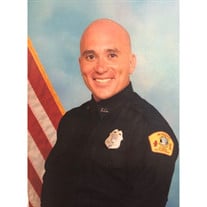 MISSION - Michael Edward Saldana (40), entered into eternal rest, surrounded by his family on July 8, 2020 in McAllen, TX. He is preceded in death by his grandparents, Enrique and Gloria Saldana. He is survived by his parents, Enrique J. and Sara Saldana, his sister, Danielle Marie Saldana, his beloved partner, Adriana Salinas, his grandparents, J.M and Josefa Castellano, and many Aunts, Uncles, and Cousins. Born in Mcallen, TX, he was a graduate of McAllen Memorial High School where he played Center for the McAllen Memorial Mustangs, and received his Medical Associates degree from the San Antonio College. He spent many years as a personal trainer and sales representative for gym equipment. It was very early in life that Michael knew he wanted to serve his community and became a volunteer Fire Fighter for Mission. In 2011 he completed the Fire Fighter's Academy and joined the Alton Fire Department where he devoted his time for 6 months before finding a permanent home with the Mission Fire Dept as a firefighter where he has served for 10 years. He thought he was superman as a child and later grew to be a superhero by following his love of firefighting. Michael was extremely proud of his profession, and when on duty, was a fierce firefighter. When called into action, Michael referred to it is as 'playtime' and put his game face on and gave into it 100%. No matter where Michael went or what he did, he always developed a strong core of friends who would become like family to him. He cherished his friendships and even pushed each of them to embrace a routine of trainings and exercise; whether it be going to the pool, a game of racket ball, or a day at the gym. He was a leader, a teacher, an enforcer, and a brother. Michael was outgoing and adventurous. He experienced the height of skydiving and when at the beach, would spend hours surfing the waves or snorkeling through the ocean. One of his highlights was going to the ranch with his girlfriend, Adriana. They loved to go feed the cows at the ranch, paint gates, and ride around to enjoy the wildlife. Sitting in a deer blind every year was never missed during hunting season and days of dove, quail, and turkey hunting was just as fun. A night around the campfire was something we all loved to do with Michael. We would tell stories, reminisce, and of course, we would talk about movies. When he was around family and friends, Michael was a teddy bear. He absolutely loved his sister, Danielle, and adored his many cousins. He would give the biggest hugs and never missed a picture opportunity. He always made sure to spice it up with a funny face, a pose, or the famous bunny ears. He had a very distinct laugh that could fill a room, and possibly throw you out of a movie theatre, but he was our comic relief of the family. When you were in the room with him, he had you smiling and laughing. He was incredibly big hearted and could light up the room with his "Howdy Doody" smile and distinctive dimples. If Michael loved you, he gave you a nickname, and that was his way of expressing his Love and making you aware that you played a special part in his life. Services for Michael will be conducted by Ric Brown Family Funeral Home in Mission, TX. Viewing and visitation will take place, Tuesday, July 14th from 4 - 7pm with a Rosary at 6pm. Funeral Mass will take place Wednesday, July 15th at Our Lady of Guadalupe Catholic Church in Mission, TX at 12:00pm, and Interment at Valley Memorial Gardens. Pallbearers are Justin Longoria, Robert Lopez, Mauricio Esquivel, Kelly Smith, Justin Cappadona, and Enrique A. Saldana. In Lieu of Flowers, donations can be made to Mission Firefighter's Association. PO Box 1284, Mission, TX 78572 The family would like to thank the City of Mission, Mission Police Dept and Michael's beloved Mission Fire Department for their continued support and assistance during this time.

MISSION - Michael Edward Saldana (40), entered into eternal rest, surrounded by his family on July 8, 2020 in McAllen, TX. He is preceded in death by his grandparents, Enrique and Gloria Saldana. He is survived by his parents, Enrique J. and... View Obituary & Service Information

The family of Michael Edward Saldana created this Life Tributes page to make it easy to share your memories.