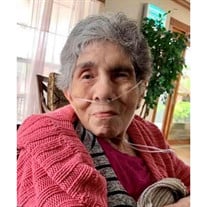 Sara Gloria Rodriquez, a long-time resident of South Texas, passed away on September 19th, 2020. Sara is survived by her children Mike Granado, Sarah Garza, Jacob Granado, John Joe Rivera, Patty Bajaras and Randy Rodriquez; her 19 grandchildren, and 6 great grandchildren. Sara Gloria Rodriguez was born on April 20, 1935, in Brownville Texas to Mr. Simon Nunez Arzola and Mrs. Antonia Gonzalez Arzola. She grew up and lived in Brownsville for 59 years before moving to Mission to be near her daughter Sarah Garza in 1994. On October 23, 2003, Sarita, as she was known to her friends, suffered a debilitating brain aneurysm, robbing her of much of her mobility and freedom. One year later she was able to return to her daughter?s home where she spent the next 8 years of her life. Finally, continuing health problems forced her to move to the Briarcliff nursing home in McAllen. In her later years she was a congregant of the church of Pastor Gabriel Alonzo; she was a regular attendee, even after her health problems. She prayed every day and night for the health and wellbeing of her children and grandchildren and their spouses. Her main concern was that they were serving God and would make Heaven their home. Sarita was a very responsible and dependable woman; as a single mother she worked hard at Lopez Super Market to provide for her family, even bringing toys home to the joy of her children when times were tough. Times were often hard, but she was able to make a feast of a steak, and if there was none for her, she always made sure her children got what they needed. Sarita attended South Texas Vocational Tech in Brownsville, receiving her booking certificate and went to work for a local shipping company, Brownsville Cold Storage. In order to care for her family she worked a second job at Montgomery Ward, and even a third job at AARP. In later years she went to work for the USDA. After she moved to Mission to be with Sarah, she worked as a caregiver, often for winter Texans in the valley for part of the year. Every time she came home, she would ask the family to pray for the people in her care. She worried that they might pass on and not be saved. Sarita was a great friend and prayer warrior, and you could often find her on 10th St with a bullhorn preaching the word of God and passing out tracts for her church. The first time she did it she was excited, but nervous, but she took to it quickly and continued for many years. Sarita referred to her best friends in church as ?Las Muchachas? - they all sat together and prayed every Sunday. Dora, Celia, Emma, and Panchita. These were the most relaxing and enjoyable times of her life. She had few worries - she was able to dedicate her time and energy to serving Jesus Christ. She had boundless energy, which she needed to raise four strong boys to be godly men, respecting their wives and families, and two strong girls to be good Christian women. After moving in with Sarah, she raised her grandchildren for a total of 18 years; raising three young boys was difficult, and they were a handful. In her later years, she was able to travel around the country seeing all of her grandchildren in their far-flung homes; she always came home excited from those trips. Sarita was loved by and loving to all who knew her, and loyal to all of her children, grandchildren, and many friends. The family would like to thank Briarcliff Nursing home for providing such wonderful care in her end years. The nurses were loving, and the staff was always on top of her every medical need. Her last six months of life were very hard under the COVID pandemic, rendering her unable to receive any visitors, but the staff kept up her care and made her comfortable all the time. We are thankful that she is now resting and glorifying he whom she loved most, Jesus Christ in Heaven.

The family of Sara Gloria Rodriquez created this Life Tributes page to make it easy to share your memories.