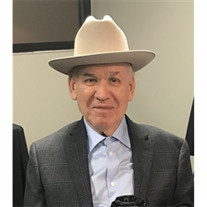 MCKINNEY - Federico Ramos Jr., age 79 of Mission, Texas went to be with the Lord on Monday, August 17th, 2020 in McKinney, Texas. He was born on September 10th, 1940 to Federico Ramos Sr. and Crispina Ramos. Federico "Junior", as he was called, was preceded in death by his father, mother and his beloved sister, Faviola Ramos Perez and her husband Dr. Pablo Perez and their children Humberto "Beto" Perez and Fabiola "Fabi" Perez Villanueva. He is survived by his nieces and nephews and their families; Daniel Perez and wife Arlene and sons, Daniel and Matthew Perez of Van Alstyne, Texas; Sandra Perez and her husband Alex Luna and daughter Alessa Luna of Plano, Texas; Paul Perez and his children Mikaela, Jaden and Canaan Perez of Fort Worth, Texas and Magda Cuellar of Plano, Texas and her son Victor Cuellar and his wife Taylor of Monett, Missouri and Fabi Villanueva's children Jacob Villanueva, Bria Villanueva Swagerty and her husband Logan, Caleb Villanueva and Elijah Villanueva of McAllen, Texas. There are six great-nieces and nephews. Throughout the life of Federico Ramos, Jr. he faced the unfortunate obstacle of being diagnosed as legally blind. Making it hard for him to do certain activities. Even with that enormous challenge and the daunting circumstances he was dealt with as a youngster growing up in the Valley in Texas, he did not let this alter or fault him from being able to still achieve regular goals in life. He went on to graduate from high school in 1963 in Mission, Texas and then worked and retired after twenty years from Citizens Memorial Hospital as a darkroom technician in Radiology and then proceeded to work and retire from the Mission Independent School District as a custodian. He owned his own house and lived by himself achieving the unimaginable and doing things people many thought he would never be able to do. Since he had poor vision, he was unable to drive a car, but instead opted to ride a bike to and from work and around his hometown of Mission. Federico Ramos Jr was unafraid of hard work because he knew he could handle it and always worked diligently to get the job done. He lived a quiet peaceful life traveling to different destinations in his earlier years with friends and family. Additionally, Federico Ramos Jr. had a great bond and affection with his loving sister Faviola Perez. Their love for one another is the love you wish all siblings in the world could have for one another. They now both reside in their new home called Heaven where they have both been reunited once again. Also, throughout his life Federico Ramos Jr. loved listening to the King of Rock'n'Roll Elvis Presley singing and humming the lyrics of every song. He also had a deep passion for his two favorite football teams, the Dallas Cowboys and Mission Eagles, and he proudly owned tons of memorabilia such as hats, clothing and coffee mugs. His favorite type of movies to watch were old westerns with John Wayne and he would watch TV show's such as Bonanza, Little House on the Prairie and Mash. He had a great amount of love for animals and always enjoyed being around them. Some of his favorite cuisine to eat was Mexican food such as tamales, rice, beans and he could always go for a nice heaping dessert of anything that had chocolate in it. He had a calm demeanor and tranquil presence about him but could always crack a joke to laugh and smile with you as well. Federico Ramos Jr will forever have a special place in all our hearts and will dearly be missed by all those who were a part of his life. Visitation will be held September 19th, 2020 at 10:00 - 11:00am at the Ric Brown Funeral Home at 621 East Griffin Parkway, Mission, Texas then followed by a memorial service that will be from 11:00 - 12:00 noon. After the service, burial will follow at Laurel Hill Cemetery in Mission, Texas. Services are under the direction of Ric Brown Family Funeral Home.

MCKINNEY - Federico Ramos Jr., age 79 of Mission, Texas went to be with the Lord on Monday, August 17th, 2020 in McKinney, Texas. He was born on September 10th, 1940 to Federico Ramos Sr. and Crispina Ramos. Federico "Junior", as he was called,... View Obituary & Service Information

The family of Federico Ramos created this Life Tributes page to make it easy to share your memories.