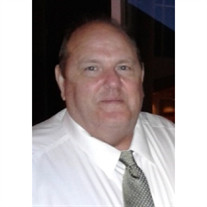 MISSION - Every once in a while, the world is blessed with an individual filled with a sense of fun and sense of humor to match. Such a man was Conrad W. Prukop, Jr. who, at the age of 62, left us all too soon on Sunday, April 7, 2019 at the Baylor St. Luke's Medical Center in Houston, Texas. Those of us who knew him can easily see Conrad filling heaven with his wonderful singing voice and with the laughter that erupted wherever he would go. Conrad was born on November 19, 1956, in Edinburg, Texas and grew up (as much as The Babe could) in Mission where he attended the Mission CISD until August of 1973 when he transferred to La Joya High School where he would graduate with his wife Carol in 1975. He attended Pan American University until this hard-working man was drawn back home to work on the family farm with his parents. Then in the years prior to his passing, Conrad worked with the USDA through TCIP. He was a pied piper, drawing children to him without question because they knew that inevitably crazy, laughter-filled moments would follow, moments that became opportunities for learning because Conrad believed whole-heartedly in educating our youth and leading by example. Every one of the children who entered his sphere of influence loved him as much as he loved them which is why he dedicated so much of his life to working with them through high school CCD classes, Ranch El Charco, Catholic Youth Blasts, sponsoring confirmation candidates, helping with confirmation retreats, and babysitting his many children, grandchildren, nieces and nephews. His love was never ending and probably sprouted from his strong faith and love of God and the Catholic Church which he served for many years as a Eucharistic minister, a member of the choir for both St. Paul's and Our Lady of Guadalupe Catholic Churches, a sponsor for the pre-marital program, and a sponsor for a group that went to Denver, Colorado to see the Pope. That love encompassed his community as well witnessed by his involvement in beach clean -ups, the Mission Service Project (building and making repairs on homes for those in need), and the National Butterfly Park. Conrad was a tireless volunteer for both church and community. Conrad was preceded in death by his father, Conrad W. Prukop, Sr., his mother, Christine Keller Prukop, and two nephews, Steven Prukop and Justin B. Lacewell. He is survived by his wife of 41 years, Carol Kissinger Prukop of Mission, his children; Conrad W. (Meredith) Prukop, III of Austin, Chrystal J. Prukop of Mission, Corin Mayon (Guillermo) Gonzalez of Mission, and Corbin Chain Atom Prukop of Mission. He is also survived by his siblings, Wallace (Judith) Prukop of San Benito, Gabriel (Brenda) Prukop of Katy, Veronica (Vernon) Schievelbein of Katy, and Benedict Prukop of Austin. Because of his all-encompassing love for the children in his life, Conrad's surviving and precious grandchildren must also be named: Madelyn Prukop, Morgan Prukop, Hikari Gonzalez, and Wren Gonzalez. Additionally surviving him are his much loved nieces and nephews: Dr. Bryan J. Prukop, Lois A. Reyes, Wallace Prukop II, Gabriel Stosh Prukop, Jocelyn Hill, Jacob Prukop, Peter Prukop, Genevieve Prukop, Damian Prukop, Fabian Prukop, Gregory Foley, Debbi Kjallbring, Kristina Lem, William Scheivelbein, Tricia Townsend, Carlos Garza Jr., Denise Crynock, Jason Lacewell, Jessica Skye Kissinger, Brent Davis, and Allyson Davis. Through their many activities and commitments, Conrad and Carol have amassed a multitude of friends and colleagues. Carol and the family would therefore love to extend an invitation to each individual to attend the memorial service from 6:00 p.m. to 9:00 p.m. with a rosary at 7:00 p.m. which will be held for Conrad at Ric Brown Family Funeral Home (621 E. Griffin Parkway, Mission) on Friday, May 3, 2019. The same invitation is extended for the funeral mass which will take place at 10:00 a.m. on Saturday, May 4, 2019 at Our Lady of Guadalupe Catholic Church (620 N. Dunlap Ave., Mission). Please be aware that there will be no graveside services at this time. Services have been entrusted to Ric Brown Family Funeral Home of Mission.

MISSION - Every once in a while, the world is blessed with an individual filled with a sense of fun and sense of humor to match. Such a man was Conrad W. Prukop, Jr. who, at the age of 62, left us all too soon on Sunday, April 7, 2019 at the... View Obituary & Service Information

The family of Conrad W. Prukop created this Life Tributes page to make it easy to share your memories.

MISSION - Every once in a while, the world is blessed with an...