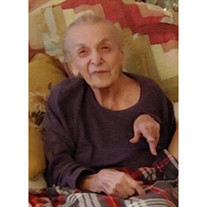 MISSION - Maria Antonia (Toni) Cavazos Perez died peacefully at her Mission home in the early morning hours of May 22nd. She was 102 years old. She was preceded in death by the love of her life, Frank (Pancho) Perez, Jr., a longtime Mission businessman, her parents, Martin (MD) and Eduviges Cavazos, and her sister, Librada. She was also preceded in death by her oldest child, Frank Perez III, and her grandson Tony Perez-Giese. She is survived by three daughters, Eduvijes (Vickie) Perez Josephson, who lovingly cared for her for the last several years of her life, Librada (Libby) Perez and Elizabeth (Betty) Perez. She is also survived by four grandchildren, Patrick Leslie (wife Pam), Francisco (Pancho) Josephson, Ana Cristina Josephson, Christian Perez-Giese (wife Jennifer), and by four great grandchildren, Max Marcus and James, Walker and Thomas Giese. She was Aunt Toni to numerous nieces, nephews and friends. She loved her hometown Mission, and lived most of her life there. She attended Mission High School, Edinburg Junior College, and received a degree from Our Lady of the Lake College in San Antonio. She taught briefly in Premont, Texas after she married Frank. They moved to Mission when her parents needed help with their business and the ranch they had bought in the 30's and 40's. Toni was active in St. Paul's Catholic Church and its parochial school. She was at one time president of the PTA. She was well-known for her cooking, sewing, and needlepoint skills. She hunted, played the piano, bird-watched, and played golf until late in her life. She loved her homes on Pamela Drive and at the ranch and made them beautiful. She loved to travel. She and Frank visited South America, Russia, Europe, and much of the U.S. She was a positive influence on all who knew her. Toni had deep roots in South Texas. Her parents were early residents of Mission, building their home on Oblate Street around 1911. M.D. was a descendant of Jose Narcisso Cavazos, one of the Valley's original land grantees. And Eduviges was a descendant of land grantees, Julian and Ventura Flores, the founders of San Diego, Texas. Toni's sister, Librada or Libby, was a Mission businesswoman who died in her thirties. Libby had been engaged to Mission World War II hero, Joaquin Castro. Friends and family were probably the most important thing in Toni's life. She loved to talk about the people she had known from childhood and revealed more and more of her storied life in the years before her death. The family wishes to thank Reyes Alvarez and Yazmin and Jillian Pinon, who helped Vickie care for her final years. A funeral mass is tentatively scheduled for 10am on July 29 at St. Paul's. This would have been Toni's 103rd birthday. With these uncertain pandemic times, it may be necessary to change plans, so email Vickie at [email protected] or Betty at [email protected] for more information. Instead of flowers or food, Toni would have wanted you to donate to your local food bank. Services are under the direction of Ric Brown Family Funeral Home of Mission.

MISSION - Maria Antonia (Toni) Cavazos Perez died peacefully at her Mission home in the early morning hours of May 22nd. She was 102 years old. She was preceded in death by the love of her life, Frank (Pancho) Perez, Jr., a longtime Mission... View Obituary & Service Information

The family of Maria Cavazos Perez created this Life Tributes page to make it easy to share your memories.