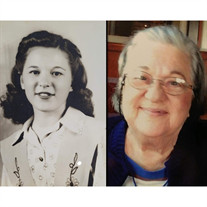 MISSION - Ruth Ella (Roberts) McDougald, 93; her soul was summoned to serve our Lord in heaven on February 22, 2021.? Ruth was born on August 10, 1927, in Harlingen, TX. She graduated from San Benito High School in 1945. While working at the Rivoli Theatre, Ruth met Charles Edward McDougald who had just been honorably discharged from the Navy. They married on December 12, 1947.? Both Ruth and Charles worked for Central Power & Light Co. (Ruth for 12 yrs.). Charles accepted a transfer to Bates Power Plant located in Mission, TX in 1958 & continued with CPL till his death in 1976. Ruth in 1960 found work with Pride of Texas Fruit Packing Co. as a secretary where she worked for 23 yrs. Her final work-life years were also secretarial and included: Right Away Foods, Duncan Ins. Co., CPL, and Lloyd Benson, Sr. Realty Co. Ruth accepted guardianship of her grandchildren who were 1 & 4yrs old at the time. Becoming a single parent at the age of 54 was a challenge, but she said it was worth it because it kept her young. She is preceded in death by her parents, Daniel Morris Roberts and Viola Felicitas (Yturria) Roberts;? husband Charles McDougald Sr.; daughter Susan (McDougald) Sens; sister Elizabeth (Roberts) Durst; and great-granddaughter Kayleigh Sens.? Ruth is survived by her son & caregiver, Charles E. McDougald Jr.; Her grandchildren Mitchell (Ruby) Sens II, and Patricia (David) Jones; brother Daniel Carl Roberts (Houston, TX); nine great-grandchildren: Matthew Hollabaugh, Emily Sens, Jake Sens, Bella Sens, Sadie Jones, Sevanna Jones, Colton Sens, Caleb Sens, Chloe Sens; and one great-great-granddaughter.? Ruth was dearly loved; she was the stabilizing force in our lives, and we will all miss her very much.? Graveside services will be held at Laurel Hill Cemetery, 805 Rankin St, Mission, TX 78572 on February 25, 2021, at 10 am.

MISSION - Ruth Ella (Roberts) McDougald, 93; her soul was summoned to serve our Lord in heaven on February 22, 2021.? Ruth was born on August 10, 1927, in Harlingen, TX. She graduated from San Benito High School in 1945. While working at the... View Obituary & Service Information

The family of Ruth Ella McDougald created this Life Tributes page to make it easy to share your memories.