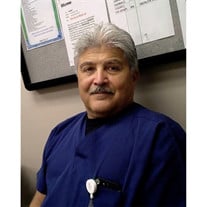 MISSION - Roberto "Robert" Lopez, 59, went to be with the Lord on Friday, April 24, 2020 after a hard-fought battle with Glioblastoma. He was at home, surrounded by his loving family. Robert was born on August 30, 1960 to Jose Luis and Dora Lopez. He was raised in the Valley and graduated from PSJA High School. From his childhood, as a migrant in the fields of California, and into adulthood as a truck driver and diesel mechanic, Robert was an exceptionally hard worker. With the loving support of his wife, Robert later enrolled in the nursing program at Pan American University, while maintaining a full-time job as a mechanic in hopes of providing a better life for his children. In the last 25 years of life, Robert loved working as an RN/House Supervisor at Edinburg Regional Medical Center. Even as a House Supervisor, his compassion continued to fuel his "not-afraid-to-get-your-hands-dirty" work ethic as he continued to assist and mentor other nurses-no matter how busy his shift. Being a nurse was never his job, it was his calling. Robert never sought retirement; he sought a return-which he accomplished temporarily when he returned to care for patients as he himself battled cancer. On his days off, Robert enjoyed life to the fullest. His talent to bring life, smiles, and laughter to any room with his jokes, his pranks, and his story telling will forever be missed. Robert's greatest joys in life, however, will always be the time he spent with his wife and five children-whether it was gambling (even on days he received chemotherapy); fishing in the "honey holes" with his children; out-shooting his sons (and many others) while dove hunting; teaching his children the game of golf; beating his family at Jeopardy! (and any other trivia) with his amazing memory; and barbecuing (including those famed ribs) that always brought the family together. Robert is survived by his wife of 33 years, Norma Lopez, his children Bobby (Keirsten) Lopez, Jessica (Josue) Diaz, Danny (Jessica Gonzalez) Lopez, Alyssa Lopez, Gabriel (Alexandria) Lopez, and his grandchildren Katelyn Lopez and Sebastian Roberto Diaz. He is also survived by his father Jose Luis Lopez, his mother Dora Lopez, siblings Joe (Maggie) Lopez, Laila (Joe) DeLeon, Olga (Richard) Sanchez, Jorge Lopez, Mario Lopez, and numerous nieces and nephews. Dad, we love you and will always miss you. Thank you for the wonderful memories.Visitation will be held on Tuesday, April 28, 2020 from 1:00 PM to 8:00 PM at Ric Brown Family Funeral Home in Mission. A celebration of life will be planned for a future date.

MISSION - Roberto "Robert" Lopez, 59, went to be with the Lord on Friday, April 24, 2020 after a hard-fought battle with Glioblastoma. He was at home, surrounded by his loving family. Robert was born on August 30, 1960 to Jose Luis and Dora... View Obituary & Service Information

The family of Roberto "Robert" Lopez created this Life Tributes page to make it easy to share your memories.