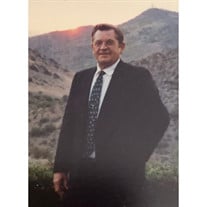 MCALLEN - "We are confident, I say and willing rather to be absent of the body and to be present with the Lord." -2 Corinthians 5:8 On June 4th, 2020, Lyle Morrison Linn entered the presence of Jesus Christ with peace and joy. His final wish was realized by having his devoted family with him as he departed this life. Mr. Linn was born on August 16th, 1935 to Wesley Morrison and Nina Barnett Linn of Pharr, Texas. He is preceded in death by his parents, his siblings, Bonnie Joyce Bartholomew, Charles Wesley "Buddy" Linn, and his beloved grandson, Kristofer Bryan Palmer. Mr. Linn was raised in Pharr, Texas and graduated from PSJA High School in 1954. In 1956, he married Barbara Jean Hagens. Together, they had three children, Lyla Jean, Stacey Ann, and Richard Morrison. In 1966, he married Janie May Blaylock. They had a daughter, Melissa Kay. In his later years, Nora Alicia Cantu was his cherished companion. He was the son of a very successful businessman, and Lyle embraced his father's passion for developing the Rio Grande Valley. He partnered with his father and brother in the concrete business, Central Ready Mix Concrete Company (CRM). That legacy has been shared with his children and continues to this day. "You will know them by their fruits." -Matthew 7:16 Anyone who knew Lyle Linn would say that "Mr. Linn was a man of few words!" His life was filled with music, dancing, and laughter. He was known for his teasing and often telling his "corny jokes". He was not a perfect man, but he was a cherished soul. He led his children to the Lord while keeping his testimony simple, "Kneel at the cross, and Christ will meet you there." Knowing that all the generations of his family are walking with the Lord and trusting in Jesus was what he considered his greatest gift. Mr. Linn is survived by: Nora Alicia Cantu, his children, Genie Oldenburg (Charlie), Stacey Morris (Randy), Richard Linn, and Melissa Wiley (Brian). His grandchildren, Kevin Palmer (Kelli), Jacob Oldenburg (Linsey), Bret Oldenburg (Jessica), Kiersten Frierson (Robert Lynn), Christopher Elliff (Ashlynn), Hannah Crews (Blaine), Evan Linn, Payton Klemstein (Jake), and Caroline Elise Wiley. His 9 great grandchildren Kearstan "Laney" Palmer, Gavin Daniel and Mason Thomas Palmer, Lace Avery and Hugh Beckham Crews, Trinity Linn and Hayden Kay Oldenburg, Macy Rae and Hudson Brooks Oldenburg, The Ricky Wayne Blaylock Family, Jerry Wayne and Hayden Woods, and the entire Central Ready Mix Concrete Company and Diamondback Transport family. His entire family would like to extend their deepest gratitude for the loving care, attention, and patience shown to Mr. Linn throughout his life and in his last days to the following: Rene Torres, PA-C and Dr. Terry Posluszny and their incredible staff members, Danny Vela of Lee's Pharmacy, and the incredibly loving caregivers of Allstate Hospice and Presidente Home Care. Each and every one of you gave years to his life, and life to his years. A celebration of his life will be held at Christian Fellowship Church on North Trenton Road in McAllen, Texas. Friends and family will begin gathering at 9:00am followed by a service at 10:00am on Wednesday, June 10th, 2020. Graveside burial will be at Roselawn Cemetery in McAllen, Texas. In lieu of flowers, Mr. Linn's sincere request was for donations to be sent to: Sunny Glen Children's Home, 2385 W Expressway 83, San Benito, Texas 78586. "Truly I say to you, unless you turn and become like children, you will never enter the kingdom of heaven." -Matthew 18:3

MCALLEN - "We are confident, I say and willing rather to be absent of the body and to be present with the Lord." -2 Corinthians 5:8 On June 4th, 2020, Lyle Morrison Linn entered the presence of Jesus Christ with peace and joy. His final wish... View Obituary & Service Information

The family of Lyle Morrison Linn created this Life Tributes page to make it easy to share your memories.

MCALLEN - &quot;We are confident, I say and willing rather to be absent...