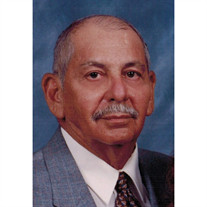 MISSION - Jose ?Joe? Hi?ojosa Jr., 85, passed away peacefully in his sleep on Thursday, October 29, 2020. He is preceded in death by his parents Jose and Maria Concepcion (Espericueta) Hinojosa and his sister Maria Belen Hinojosa Garcia. He is survived by his loving wife of 64 years, Pauline; his children, Yolanda (Jose ) Martinez, Maria Estela (Mike) Garza, and Iris (Norberto) Ruiz, his granddaughter whom he raised; his brothers, Jesus (Maria) Hinojosa, Felix (Modesta) Hinojosa, and Arturo (Amalia ) Hinojosa; his brother-in-law Narciso Garcia; his five grandchildren; and seven great-grandchildren. Jose was born on March 10, 1935 in Linn, Texas and was raised in San Carlos. He attended Edinburg schools and moved to California where he earned his GED diploma. He graduated from the Commercial Trades Institute in Chicago as a certified automobile mechanic and completed a specialty in automatic transmissions from the New York Technical Institute of Cincinnati. He then earned his welding certification from Merritt College in Oakland, California, after which he became a welder for the United States government. Jose and his family moved back to Texas in 1973, where he worked for the Food Machinery Corporation (FMC) in McAllen as a service engineer until it was shut down in 1982. In 1983, he decided to open his own business ? North Conway Auto Salvage ? where he dismantled, repaired, and sold automobile parts. Due to health issues, he closed and sold the business in 2007, and spent the rest of his retirement with his wife and family. Jose loved the outdoors and enjoyed fishing, camping and anything else that involved being in the sun ? but never without donning one of his signature trucker hats. He will be mostly remembered for his humor and fun-loving nature. He would often crack jokes, pull funny faces and make family functions lighthearted and memorable. As a strong man of faith, he will be missed as he takes his place among the angels. Visitation will be held from 1 p.m. to 9 p.m. with a 7 p.m. rosary service on Tuesday, Nov. 3, 2020, at Ric Brown Family Funeral Home in Mission. Funeral services will be held at 12 p.m. on Wednesday, Nov. 4, 2020 at Our Lady of Guadalupe Catholic Church in Mission. Burial will follow at Valley Memorial Gardens Cemetery in Mission. Services have been entrusted to Ric Brown Family Funeral Home of Mission.

MISSION - Jose ?Joe? Hi?ojosa Jr., 85, passed away peacefully in his sleep on Thursday, October 29, 2020. He is preceded in death by his parents Jose and Maria Concepcion (Espericueta) Hinojosa and his sister Maria Belen Hinojosa Garcia. He... View Obituary & Service Information

The family of Jose "Joe" Hinojosa created this Life Tributes page to make it easy to share your memories.