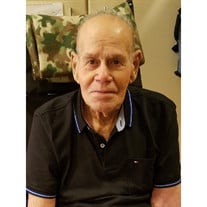 MCALLEN - Dionicio Gonzalez Sr., went to be with the Lord on December 3, 2019 at the age of 93. He is preceded by his wife Alicia G, Gonzalez of 61 years; parents Avelino and Lucinda Gonzalez; sisters Eduvina Soza and Rosa Rumion; and brother Amador Gonzalez. Dionicio is lovingly remembered by his daughter Lilia Warkentine (Jim) and his sons Natvidad Gonzalez (Iriz), Avelino Gonzalez (Carla), Dionicio Gonzalez Jr. (Ma. Alicia), and Jose Gonzalez (Yolanda); his sister Petra G. Vera and sister-in-law, Ma. Celia Garcia. Dionicio was blessed with his grandchildren: Alethea W. Keen (Donald), Jennifer W. Lowery (Wayne) and James P. Warkentine; Joshua Gonzalez (K'Len) and Alicia McClain (Bryan), Yadira Gonzalez, Avelino Gonzalez Jr., Adrian Gonzalez, Celina Gnz. Castillo (Michael), Isaak and Anyssa Gonzalez; Jason and Erik Gonzalez; Eduardo Gonzalez, Melanie Mills (David), and Anthony Gonzalez and 18 great-grandchildren and numerous nieces, nephews and cousins. Dionicio was born in La Grulla, Texas on November 11, 1926. He farmed his parents' land several years and then enlisted in the Army during WWII. He was very proud to have served his country and of being a veteran. After returning from WWII, he married the love of his life, Alicia Garcia and they moved to Mission, Texas. Because he valued education he was determined to obtain his GED high school diploma and later attended college while working in Corpus Christi, TX. He retired from Civil Service at Moore Air Base and CC Naval Base. He accepted the Lord as his Savior and he and his family attended the Mission Mennonite Brethren Church. When they moved to the Alton area, they attended El Templo Biblico Church with Pastor Jesse Trevino. Dionicio has been a resident at the Alfredo Gonzalez Veterans' State facility for the past 3 years. He enjoyed living there and grew very fond of the staff. Exceptional care was provided to him at this facility. We would like to thank all the staff that cared for him especially Liza, Tania, Araceli, Lorena, Jessica, Javier and Dr. Ernesto Trevino. Most of all, the family has much respect, love and gratitude to his grandson, Abie Gonzalez, who lovingly and patiently assisted Dionicio and Alicia in their daily care. On Thursday December, 5th visitation and viewing will be from 5PM to 8PM including a remembrance at 7PM. The Celebration of Life service will be held at Ric Brown Family Funeral Home in Mission, Texas at 11AM on Friday December, 6th. Interment will follow at Rio Grande Valley State Veterans Cemetery on 2520 S. Inspiration Road in Mission, Texas at 1PM.

MCALLEN - Dionicio Gonzalez Sr., went to be with the Lord on December 3, 2019 at the age of 93. He is preceded by his wife Alicia G, Gonzalez of 61 years; parents Avelino and Lucinda Gonzalez; sisters Eduvina Soza and Rosa Rumion; and brother... View Obituary & Service Information

The family of Dionicio Gonzalez created this Life Tributes page to make it easy to share your memories.

MCALLEN - Dionicio Gonzalez Sr., went to be with the Lord on...