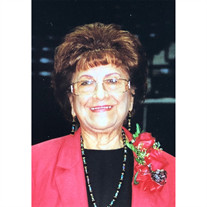 MISSION - Irene M. Garcia, 86, of Palmview, Texas went to be with the Lord on Saturday, August 31, 2019. She is preceded in death by her parents Abelardo Mireles and Yrene Aguilar Mireles. Six brothers-Abelardo, Victor Manuel, Onesimo, Eliseo, Gregorio and Roberto. Two sisters-Cecilia Olivo and Librada Parra and one grandson Eliseo (Eli) Flores. She is survived by her husband of 60 years Jorge G. Garcia, her daughter Debra Flores (Former State Representative Ismael "Kino" Flores),two grandsons Judge Ismael "Kino" Flores Jr JD (Vanessa JD) , Army 1st LT Eric Daniel Flores JD (Victoria JD) , one great grandson Fitzgerald Francis Flores and expectant great granddaughter Elaina Grace Flores and numerous nieces and nephews. Eighty six years of devotion to the children of Western Hidalgo County. Trailblazer: to lead-to be first-to inspire-to believe-to clear a path-to think beyond your opportunities. Irene graduated from La Joya High in 1953 as the third ranking student in her class. She left Los Ebanos to study from her protective surroundings and thrived with the new challenge. A young lady in foreign territory she set out to prove her abilities, a rare task considering the times. She later obtained two master degrees while working, being a wife, a mother and serving her community during her spare time. She returned to lead the elementary schools in Mission, Penitas, Abram La Joya, Mcallen, Pharr and Hidalgo. Irene inspired and gave her all to her students and demanded parental participation long before it became a catchy phrase. She led the La Joya ISD Bilingual Program for many years achieving tremendous success at a state/national level. Her success was based on a premise that each bilingual family would stay educationally connected during their migratory period ensuring that educational time was not lost. Her passion was to work tirelessly inspiring other to follow their dreams and not be afraid to always give their heart to the students. She was so passionate about inspiring her students; she once slept on a school roof top after her students exceeded her expectations. Irene served her community honorably serving in elected positions for over four decades. She served on the La Joya ISD as member, secretary, vice-president and president. Being a very political individual she played a monumental role in the growth of La Joya ISD from a 2A district to a 5A district. She was instrumental in the passage of an election that created the original South Texas Community College. She served twelve years with the South Texas College System where she had the opportunity to serve as its chairwoman. Governor Ann Richards appointed her to several state-wide committees and called on her occasionally for educational advice. Irene had a tremendous and assertive spirit; always tearing down walls when it came to student needs. She saw every excuse as an opportunity for success. One of her favorite quotes was "Como que no se puede". The La Joya ISD recognized her efforts and named a new middle school in her honor. She visited the campus at every opportunity constantly challenging the students. As a role model, Irene recruited, trained, and encouraged individuals to stop doing what they were doing and enroll in college. She motivated them to finish their college education and give back to their community. As her students strived to achieve success, she made sure that every resource was afforded to them ensuring a 100% completion rate. It was during this time that she helped, joined and participated in a Bilingual march to the state capital in Austin fighting for the human rights of her bilingual family. "Irene was truly a person who not only inspired me to do more for myself, she also provided me with the tools to ensure that I would succeed"...Today's and Yesterday's Teachers. Irene was truly a person of no equal-no rival. May she continue to care for us all from heaven above. Pall bearers: 1st LT Eric D. Flores JD, Judge Ismael "Kino" Flores Jr. JD, David Mireles, Stephen Beckman, Rev. Jaime Chapa and Ricardo Villarreal. Honorary Pallbearers: Fitzgerald F. Flores, Ricardo Mireles, Rolando Mireles, Vidal Quintanilla, Doming Villarreal, Dr. Alejo Salinas, Gumaro "Maro" Flores and Altagracia Cavazos. A heartfelt thank you to Lupita Flores, Socorro Gonzalez, Julie Barrios and all the staff at Mission Hospital and the Mission Valley Rehab Center. Visitation will be held at Faith Fellowship Bible Church, 1110 Tom Gill Rd. in Pe?itas, on Tuesday, September 3, 2019 from 3 p.m. to 9 p.m. with a 7 p.m. prayer service. Funeral service will be held at Faith Fellowship Bible Church on Wednesday, September 4, 2019 at 9 a.m. and will be officiated by Pastor Domingo Villarreal. Burial will follow at the Rio Grande Valley State Veterans Cemetery in Mission. Services are under the direction of Ric Brown Family Funeral Home in Mission.

MISSION - Irene M. Garcia, 86, of Palmview, Texas went to be with the Lord on Saturday, August 31, 2019. She is preceded in death by her parents Abelardo Mireles and Yrene Aguilar Mireles. Six brothers-Abelardo, Victor Manuel, Onesimo, Eliseo,... View Obituary & Service Information

The family of Irene M. Garcia created this Life Tributes page to make it easy to share your memories.