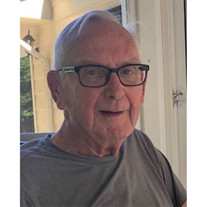 The Reverend Herbert Hans Feierabend,89, died peacefully at home in Mission, Texas on August 13, 2020 after a stroke. He was cared for by his devoted wife and partner of 66 years, briefly supported by A Healing Touch hospice. He endured heart disease, Parkinson?s and Lewy Body Dementia. He was a thoughtful, kind, witty man with a ready laugh, who would give the shirt off his back. He will be sorely missed. Herb was born in Enid, Oklahoma, on April 19, 1931, the fifth of six children of missionaries Reverend Herman and Marie (Nottrott) Feierabend, the only siblings not born in India. Paul and Louise died very young. Dr. Theodore Feierabend of Madison, WI and Ruth Gendzwill of Sault Saint Marie Michigan preceded him in death. At age six he began Boarding School in India at Mount Hermon and later Woodstock. In 1947 he left India, and finished his senior year at Belleville High School, IL. He worked his way through Elmhurst College, lettering in track. At Elmhurst, he met the love of his life, Beverly June Filenius, a friend of his little sister. They married December 19, 1953, at Christ Church, Evangelical & Reformed in Milwaukee. He graduated from Eden Seminary in 1954 with a Bachelor of Divinity, and was ordained at Christ Church. Their daughter Laura was born in Sauk County, WI, where they served the rural Harrisburg and Zion E & R Churches. Those churches merged into First United Church of Christ in Sauk City, WI (where they remain members). After moving to New Ulm, MN in 1957 to serve Friedens UCC, son Herbert William (Chip) and daughter Ruth were born. They moved to Wayne, WI in 1963 where they served Salem, UCC and Kohlsville, UCC. In 1970, they relocated to serve St. Luke?s UCC in South Milwaukee, where their children graduated from high school. He had pioneering open heart surgery in 1974. Their 1979 trip to India missions included lunch with Mother Theresa. They moved to Plymouth, WI, and served Immanuel UCC, near Lakeland College. By 1986 his health deteriorated, and they returned to the hills of Baraboo to enjoy daily walks, garage sales, playing cards and deer hunting. After traveling the country, they found Canyon Lake Resort in Mission, TX, where they initially spent the winter months, permanently relocating in 2011. In 1993, they started Mabel?s Building Mission that continues to build shelters and support education for the needy of Nuevo Progresso, Mexico. He is survived by beloved wife Beverly, children Laura (Jon Scudder) of Maple Grove, MN, Chip (Chris) of Madison, WI and Ruth (Deirdre Healey) of Laurel, MD, as well as sister Barbara Ford, Belleville, IL, grandchildren Ilsa (Vuong Vu), Lauren and Nolan Feierabend, and Eric and Allison Scudder. Memorial service will be held outside at First UCC in Sauk City, WI Thursday September 10 at 10:30 am. Please respect social distancing guidelines, wear a mask and bring a chair. Memorials suggested to the Michael J Fox Foundation for Parkinson?s Research https://www.michaeljfox.org/ or United Church of Christ Neighbors in Need fund https://www.ucc.org/nin

The Reverend Herbert Hans Feierabend,89, died peacefully at home in Mission, Texas on August 13, 2020 after a stroke. He was cared for by his devoted wife and partner of 66 years, briefly supported by A Healing Touch hospice. He endured heart... View Obituary & Service Information

The family of Reverend Hans Feierabend created this Life Tributes page to make it easy to share your memories.