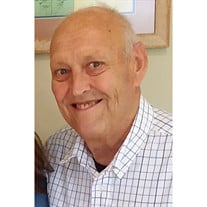 MOORHEAD - On Friday, November 22, 2019, Keith Allen Danielson, loving husband and father, passed away at the age of 74, at his winter home in Texas, surrounded by love. Keith was born on September 29, 1945 in Fargo, ND to Alvin and Violet (Snook) Danielson as the third child of 11. On January 4, 1966, he married the love of his life, Caroline Sue Albaugh. They eloped to Sisseton, SD and returned to make their home for 44 years on a small farm in Sabin, MN. They were blessed with four children, nine grandchildren, and two great grandchildren. Keith worked various labor jobs-a seed company, meat processing plants, Fairmont Creamery, and finally retiring from American Crystal Sugar. He was a hard worker with a witty sense of humor, and was generous in all ways. In fact, it was his desire to continue to give to others even after death, therefore his body has been donated to the University of Texas to support medical research and training. Keith was a farmer at heart and jack of all trades. He took pride in growing crops, raising animals, and tinkering with things that needed fixing. Sunday drives were a happy pastime that led to his retirement years exploring the country by RV. He loved to fish, play games, and eat ice cream-especially when surrounded by family and friends. He was preceded in death by his parents, three brothers, Donald, David and Daniel, son-in-law, Scott Graham, brother-in-law, Richard Sorenson, sister-in-law, Katherin Danielson, three nieces and one nephew. He is survived by his wife Caroline (Albaugh) Danielson of Moorhead; children, Lonna Danielson of Baxter, MN, James (Kari LaValley) Danielson of Horace, ND, Diana (Charles) Lillicrap of Prior Lake, MN, and Chadd (Deanna) Danielson of Motley, MN; grandchildren, David, Dani, Torie, Macie, Tessa, Bridget, Finnegan, Laney, and Adeline; great-grandchildren, Wesley and Ella; brother; DuWayne (Jean) Danielson, sisters; Linda (Richard) Berg, Kathleen (Dave) Berg, Betty Sorenson, Sandra (Dan) Bolgrean, Anna (Roger) Fischer, Diane (John) Pfeifer; sister-in-laws, JoAnn Danielson and Teri Danielson; and many nieces and nephews. Funeral services will be held on Monday, December 2, 2019 at 11:00 a.m. at Our Savior's Lutheran Church, 610 13th St. N., Moorhead with lunch and visitation to follow.

MOORHEAD - On Friday, November 22, 2019, Keith Allen Danielson, loving husband and father, passed away at the age of 74, at his winter home in Texas, surrounded by love. Keith was born on September 29, 1945 in Fargo, ND to Alvin and Violet... View Obituary & Service Information

The family of Keith Allen Danielson created this Life Tributes page to make it easy to share your memories.