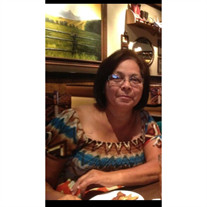 PALMHURST - Juanita G. Contreras was born on January 3, 1950 in Mission, Texas to Leonarda Trejo and Nicholas Gonzalez. As the oldest daughter, Juanita attended Mission High school and graduated in 1969. She enjoyed sewing along with arts and crafts and was awarded the silver thimble in High school. Her amazing talent resulted in her sewing her very own wedding dress in 8 hours, she could truly make anything she put her mind to. Juanita resided in Mission, Texas her whole life where she met the love of her life, Guadalupe Contreras and married in 1972. Juanita was a devoted house wife and one of her favorite date nights with her husband and children was going to play bingo. Her favorite place to travel was going to Idaho where she would visit her daughter and grandchildren. She was the anchor that held everyone together because she valued the true meaning of family when it came to family gatherings. To her family and friends she was referred to as "having the hands of an angel" because her cooking was one of a kind. On June 23, 2020 Juanita G. Contreras passed away in Twin Falls, Idaho, she was 70 years old. One of her last words was "what more beautiful day than today for me to go on mine and your dads wedding anniversary." It was 48 beautiful unforgettable years that they would have been married. Juanita is preceded in death by her husband, Guadalupe V. Contreras, mother, Leonarda T. Castro, father, Nicholas Gonzalez, and brothers; Jose N. Gonzalez and Ruben Castro. She is survived by her children Sabina Contreras , Rosalva (Humberto) Sanchez Jr., Manuel Contreras, and Guadalupe (Melinda) Contreras Jr., grandchildren; Steven, Stephanie, Sam, Aaron, Arnold, Nicholas, Oscar, Gracie, Gabby, great granddaughter Adison, stepmother, Celia Gonzalez, stepfather, Nacario Casto, sisters; Rosario, Gricelda, Norma, Alma, brothers; David, Daniel, Jose M, Gerardo. Along with many aunts, uncles, nieces, and nephews. Memorial service will be held on Thursday, July 9, 2020 from 5 p.m. to 9 p.m. with a 7 p.m. rosary at Ric Brown Family Funeral Home of Mission. Funeral mass will be held at 12 p.m. on Friday, July 10, 2020 at Our Lady of Guadalupe Catholic Church in Mission. Interment of ashes will follow at Rio Grand Valley State Veterans Cemetery. Service are under the direction of Ric Brown Family Funeral Home of Mission.

PALMHURST - Juanita G. Contreras was born on January 3, 1950 in Mission, Texas to Leonarda Trejo and Nicholas Gonzalez. As the oldest daughter, Juanita attended Mission High school and graduated in 1969. She enjoyed sewing along with arts and... View Obituary & Service Information

The family of Juanita G. Contreras created this Life Tributes page to make it easy to share your memories.