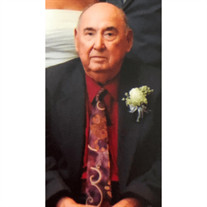 MISSION - Calixtro (Kike) B. Gomez AKA "Chico", went to be with the Lord April 6, 2020. He was 87 years old. He was born in Charlotte, Texas on January 25, 1933 to Guadalupe & Carolina Gomez. On April 7, 1956, he was united in marriage to Magdalena Saenz. He was a devoted husband, father, grandfather & great-grandfather. He served in the US Army from 1952-1954 and was a Korean War Veteran. Upon conclusion of his service, he became a self-made businessman by 1968. He was the successful and proud owner of Gomez Auto Service (Chicago, IL) and ,later, Chico-Rio Enterprises (Rio Grande City, TX). He retired in 2015. He is preceded in death by his parents Guadalupe & Carolina Gomez and son Reynaldo Gomez. He is survived by his wife, Magdalena Saenz Gomez, his sisters Maria De Jesus Gomez Lopez and Maria Gomez Cano, his children Raymundo (Graciela), Ricardo (Debora), Hilda & Irene, his grandchildren Will Kalter (Debbie), Amanda (Michael) Arvidson, Devin (Nicholas) Smith, Elijah, Kristen, Raymundo Jr., Jewels, Jacob, and his great-grandchildren Gabriel & Callum Arvidson and Josephina Smith. Visitation and arrangements will be taken care of by Ric Brown Family Funeral Home of Mission. Graveside Service will be held at 2:00 PM on Friday, April 10, 2020 at Valley Memorial Gardens. We thank everyone for your understanding during these difficult times.

The family of Calixtro AKA Chico created this Life Tributes page to make it easy to share your memories.