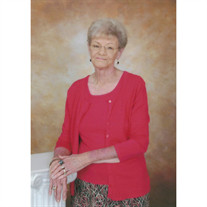 "You should be known for the beauty that comes from within, the unfading beauty of a gentle and quiet spirit, which is so precious to God." 1 Peter 3:4 Carolyn Chesshir Burt, 81, was born in Mission, Texas, on October 16, 1938. Mission was her home. She grew up and then raised her own children on the family property on the 2 mile road. Carolyn loved life, family, and friends. While experiencing chronic health issues for some time, Carolyn was unexpectedly called Home November 10, 2019. "I have fought the good fight. I have finished the race. I have kept the faith." 2 Timothy 2:4-7. She will be remembered as a loving and devoted wife, mother, sister, grandmother, great grandmother, and friend. Carolyn was born to Autry and Mildred Chesshir. Her father passed away at the early age of 39, and her mother had to quickly find a way to support the family. She opened a small food court next to the Mission School Complex and began selling her famous hamburgers for lunch to students. Carolyn, her sister Shirley, and brother, Dick, helped Mildred daily with her livelihood. After graduation in 1956 from Mission High, Carolyn attended Durham Business College in Harlingen. She took a Valley Transit bus from Mission to Harlingen each class day. The bus driver, Marlin Burt, always teased that Carolyn courted him by sitting in the front seat right behind him and would purposely leave her sweater on her seat so he would have to take it to her home at the end of his route. Carolyn and Burt were married in 1958 and were together for 45 years before Burt succumbed to pancreatic cancer Easter morning 2003. Their life together was full. They enjoyed traveling, just the two of them, or joined by family and friends. They traveled to many parts of the USA but especially enjoyed the mountains of Arkansas and Tennessee. Carolyn continued her love of travel after Burt passed away and just this summer spent a week in the mountains and visiting her family's roots in Nashville, Arkansas. Carolyn and Burt were self-employed as an independent dealer for the U-Haul Company. They operated Burt's U-Haul on North 10th Street in McAllen for 21 years before retiring in 1992. They were named a Top 100 dealer in the nation for many years, in large part to Carolyn's leadership, financial stewardship and leadership skills. They served the people of the McAllen area as well as the Law Enforcement community. Carolyn and Burt were known for their friendliness and willingness to help anyone, anytime. They loved their family and spent countless hours involved in any and all activities their children participated in. Carolyn was a doting mother to her three children she leaves behind. They are sons Alan (Linda) Burt of North Richland Hills, TX, Gary (Lucy) Burt of Mission, and daughter Lori (Brian) Burt Carlson of Austin, TX. Her love and support of them was steadfast and unwavering. Her daughter, Lori, was her best friend. "Honor her for all that her hands have done, and let her works bring her praise at the city gate." Proverbs 31:31 Carolyn leaves her beloved grandchildren whom she saw grow up and the great grandchildren whom she adored. She continues to live through them. Her grandchildren include Lindsay (Zac) Burt Thompson, Stacey Burt, Holly (Jake) Burt White, and Tucker Burt who all live in the Dallas/Fort Worth area. Granddaughter, Breann Carlson, lives in Austin, and grandson, Joshua (Ana)Carlson, resides in Edinburg, TX. Her great grandchildren include Zachary, Malachi, Adriel and Chanan Thompson along with Chloe White, as well as Kiara Carlson whom she spent the afternoon with the day of her unexpected passing. "Thanks for all the love, the fun, the good times, the life lessons, and the memories. We Love You!" Carolyn also leaves behind her sister, Shirley Chesshir Myers, of Aledo, Texas. Carolyn's love for Shirley was unconditional. Shirly and her late husband, Bob, were important figures in her life and blessed her with love, hope, faith, and continuous support. Carolyn's brother, Gene (Dick) Chesshir, of Mission was a constant in her life. For over 30 years, he went to her little cabin every Sunday morning where they would sit on the porch, built by Burt, and talk about life. Left behind, too, are numerous cousins, nieces, nephews, and many longtime friends. The family extends a special thank you to Carolyn's cardiologist, Dr. Luis Padula, who she credited many times with "keeping her alive" over the last two decades. An eternal thank you is given to Lydia Martinez, who cared for mom for 42 years. Carolyn thought of both as family, not physicians. Visitation will be held from 5:00 pm - 8:00 pm, Thursday, November 14, 2019, at the Ric Brown Family Funeral Home in Mission. Services will be held at 11:00 am at Ric Brown Family Funeral Home Chapel in Mission on Friday, November 15, 2019. Burial will follow at the Laurel Hill Cemetery in Mission. The Chesshir family has been instrumental in the upkeep and beautification of the cemetery. Officiating will be Reverend John Tisdale, a family friend. Pallbearers will be Joshua Carlson, Brian Carlson, Tucker Burt, Jake White, Wayne Sojak, and Juan Ayala. Honorary Pallbearer is Ruben DeLeon. Those wishing to make a monetary donation in lieu of flowers can do so in Carolyn's memory to the Pancreatic Cancer Action Network, the organization she entrusted to find a cure for the deadly cancer that took her husband's life far too soon. Services are under the direction of Ric Brown Family Funeral Home of Mission, TX.

"You should be known for the beauty that comes from within, the unfading beauty of a gentle and quiet spirit, which is so precious to God." 1 Peter 3:4 Carolyn Chesshir Burt, 81, was born in Mission, Texas, on October 16, 1938. Mission was... View Obituary & Service Information

The family of Carolyn Chesshir Burt created this Life Tributes page to make it easy to share your memories.

&quot;You should be known for the beauty that comes from within, the...