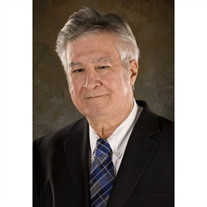 MCALLEN - Eduardo Fausto Borjon, MD, MBA, MPH, passed away at his residence on April 10, 2019. Born in Monterrey, he moved to McAllen and graduated from McHi, and later attended Pan American University before returning to Monterrey to attend the University of Monterrey and received his medical degree. He served on the board of directors for Mission Hospital from 1986-1987. He assisted Kika de la Garza in securing funds for the construction of the new hospital. Besides Mission Hospital, he practiced medicine at the McAllen Heart Hospital, the original Edinburg Hospital, the San Benito Hospital, and had a private practice in Sharyland for more than 20 years. He continued his education in medicine as well as in business and encouraged many to advance their education. He practiced medicine and cared for the community for nearly 40 years. He enjoyed playing the guitar and piano, as well as being an avid golfer. He had a good sense of humor, and always made those around him laugh. Dr. Borjon was preceded death by his wife Sandra Isabel Borjon; his parents Francisco and Delia Borjon; sister-in-law Maria de Jesus Morales Candanosa; aunt Loyda Noehmi Guajardo Kemffer. Dr. Borjon is survived by his children Claudia (Raul) Hernandez of Mercedes, Tx, Adriana (Brandon) Mendiola of San Marcos, CA, Eduardo Fausto Borjon, Jr. of McAllen, TX, William Edward (Vanessa) Borjon of Mission, TX; grandchildren Ezra, Liam, Emri, Isabella, William Jr. He is also survived by his siblings Gerardo Javier Borjon, Patricia Eugenia (Abiel Marcos Garza Garcia) Borjon Guajardo, Ricardo Augusto (Norma Azucena Moya Chavez) Borjon Guajardo, and Bernardo Moises Borjon Guajardo. The family would like to extend a special thanks to his longtime friend and caregiver Julie. Visitation will be held on Monday, April 15, 2019 from 1-9 with a 7pm rosary at Ric Brown Family Funeral Home in Mission. A funeral mass will be held on Tuesday, April 16, 2019 at 12 noon at Our Lady of Guadalupe Catholic Church in Mission. Burial will follow at Valley Memorial Gardens Cemetery in McAllen. Services are under the direction of Ric Brown Family Funeral Home in Mission.

MCALLEN - Eduardo Fausto Borjon, MD, MBA, MPH, passed away at his residence on April 10, 2019. Born in Monterrey, he moved to McAllen and graduated from McHi, and later attended Pan American University before returning to Monterrey to attend... View Obituary & Service Information

The family of Dr. Fausto Borjon created this Life Tributes page to make it easy to share your memories.