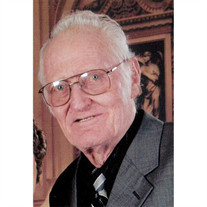 MISSION - James Wallace "Red" Bennett, 88, passed away peacefully on March 21, 2020 at his residence, The Gardens at Brook Ridge. He was born on April 13, 1931 in Brownsville, TX. In his early childhood along with his parents they moved to Mission, TX. He was preceded in death by his loving wife of 67 years of marriage, Betty Bennett; his parents, Marie and Sam Bennett; his brother, Edwin D. "Bubba" Bennett. Wallace worked as a salesman for Walker Craig Co. and an employee of the Water District for a short period of time. Then, he was employed by Central Power and Light Company for 33 years and retired in 1988. He served in the National Guard. Wallace was a member of the Golden Kiowatt Club and the Good Sam's Club. He was a Jack of all trades and a master of none. He was a fun-loving husband, Dad, grandpa, and friend to many who never met a stranger. He will always be remembered for his trailer group travels, many fishing trips to the East Cut, and his love for the Frio River. He was the host of many Shenanigans on the porch in Concan, not to mention his EARLY MORNING wake up calls with the A&M War Hymn!!! Wallace is survived by his children Susan (John Wattier) McDaniel, James "Jim" (Vickie) Bennett, Jr; and Ginger (Ron) Limbaugh; nine grandchildren; thirteen great grandchildren; and two great-great grandchildren. He was also survived by his four legged pal, Fannie Mae. A private family graveside service will be held, Friday, March 27, 2020. A memorial service will be held at a later date. A special thanks goes to The Gardens for all their love and care. In lieu of flowers, donations may be made to Amara Hospice, 505 W. Owassa Rd., Edinburg, TX 78539. Funeral services are under the direction of Ric Brown Family Funeral Home in Mission.

MISSION - James Wallace "Red" Bennett, 88, passed away peacefully on March 21, 2020 at his residence, The Gardens at Brook Ridge. He was born on April 13, 1931 in Brownsville, TX. In his early childhood along with his parents they moved to Mission,... View Obituary & Service Information

The family of James "Red" Bennett created this Life Tributes page to make it easy to share your memories.