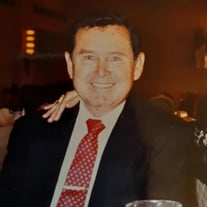 LEO ACOSTA, JR of Mission, Texas passed away on Wednesday, March 3rd, 2022 at the age of 87. A beloved husband, father, grandfather, great-grandfather, and brother died peacefully in his sleep with his beloved wife of 61 years, Velia Navarro Acosta by his side. Leo was born in Mission Texas on August 5, 1934, to father Leo Acosta and mother Porfiria Espinoza. He had four brothers and seven sisters, there is one sister surviving, Lydia Quintanilla. He attended college for two years and enlisted in the Army. He was stationed in Germany for three years and participated in the Army band playing the trumpet, which he enjoyed immensely and never forgot. He returned to Mission Texas and met Velia Navarro at a dance, they soon after married and had 4 children. He owned O.K. Tire Sales in McAllen, Texas and then later retired from working as a counselor at Edinburg County Restitution Center. Leo was full of life, a Christian who brought many to the Lord and baptized them in his pool. He was a very positive, outgoing, and wonderful person to be around. We are grateful to the Lord for having him in our lives all these years and look forward to seeing him again. His spirit is now with the Lord and may he rest in peace awaiting his resurrection when the Lord returns. Leo was preceded in death by his parents and by his brothers and sisters. He is survived by his wife Velia N. Acosta; children Leo Acosta III, Edward Acosta (Irma), Robert Lee Acosta (Cindy) and Laura Lee Acosta Whitley (Noble); grandchildren Ryan and Alesaundra (David), Sienna, Bobby and Nikki, Troy (Lauren), Bryan, and Jacob, and four great-grandchildren Leo, Emma Claire, Ledger and Quinn. “May the LORD bless you and keep you; may the LORD cause His face to shine upon you and be gracious to you; may the LORD lift up His countenance toward you and give you peace.” (Numbers 6:24-26)

LEO ACOSTA, JR of Mission, Texas passed away on Wednesday, March 3rd, 2022 at the age of 87. A beloved husband, father, grandfather, great-grandfather, and brother died peacefully in his sleep with his beloved wife of 61 years, Velia Navarro... View Obituary & Service Information

The family of Leo Acosta Jr. created this Life Tributes page to make it easy to share your memories.