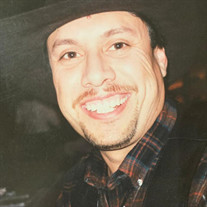 Juan Carlos Ayala born February 22, 1966 went to be with the Lord on Wednesday, July 21, 2021 in Edinburg, Texas after a lengthy illness. Left to cherish his memory is his loving wife Sandra Ayala, his children Kristy Lamar Ayala and Juan Carlos “JC” Ayala Jr., his grandmother Domitila Ibarra, and his siblings Josefa (Daniel+) Puente, Sylvia (Francisco) Solis, Sandra Ayala, 10 nephews and nieces and 5 great nephews and nieces. Also left to cherish his memory is his in law family who loved and supported him beyond boundaries, Maria (Felix+) Castaneda, Arturo (Amparo) Anzaldua, Bernardo (Micaela) Anzaldua, Dalia Anzaldua (Gary), Gerardo (Lourdes+) Gonzalez, Matilde “Chile” (Mirtha) Gonzalez, Norma (Gilberto) Lerma, Pilar (David) Garza, numerous loving prayer warrior nieces and nephews and great nieces and nephews. He is preceded in death by his father Roberto Ayala Singleterry, his mother Enriqueta De La Garza Ayala, and his brother Saul Ayala. Juan Carlos was an amazing husband, father and son. He was a great brother and beloved Tio who was much loved by everyone who met him. He was a funny, smart and charismatic man. He was a great lover of music and life. Everywhere he went he would light up the room. He always had a BIG smile on his face. He was a lover of sports (GO COWBOYS) and WrestleMania. Raised in Pharr, he graduated from PSJA in 1985. He was a hardworking man who loved his job and his family but most importantly his kids. He worked for Lack’s Furniture for many years until his accident in 2006. He spent the last 15 years of his life surrounded by his loving wife and kids. His sense of humor never waivered and his smile never faded. He had two living sister in laws, Pilar and Norma, who were also his partners in crime and the best prayer warrior mother in law anyone who could ever have, Maria Del Pilar (Benito+) Anzaldua, that loved him like a son. He will be greatly missed and he will forever remain in our hearts. I love you dad.

Juan Carlos Ayala born February 22, 1966 went to be with the Lord on Wednesday, July 21, 2021 in Edinburg, Texas after a lengthy illness. Left to cherish his memory is his loving wife Sandra Ayala, his children Kristy Lamar Ayala and Juan Carlos... View Obituary & Service Information

The family of Juan Carlos Ayala created this Life Tributes page to make it easy to share your memories.