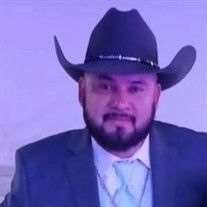 Jason Anthony Aleman went to his heavenly home on January 30th 2022 in Mentone, Texas as the result of an automobile accident. He was 36. Jason worked in the oilfield industry for twelve years. Jason, Jace, J, Poppa, or Daddy as he was called was born on December 15th, 1985 to Tomasa Lopez and David Aleman in Joliet, Illinois. Jason is survived by his life-long love Crystal, his daughters Harley and Jacelyn, son Jason Jr., Siblings, Parents, and best friend Juan. He is preceded in death by his paternal grandpa Isaac Aleman and maternal grandparents Jose and Ana Torres. Jason’s caring spirit and generous heart could be felt by anyone he came in contact with. He had a special gift of not only seeing the good in people but bringing out the best in them as well. Jason loved people and they loved him. Jason was an avid lover of life and a great day for him was fishing or hunting with his kids, singing and making his wife laugh, or BBQ-ing. Jason loved the outdoors, his love brought out the happy free spirt that defined him. Jason also loved music, which was an expression of his emotions, and he was a dancer. Loved dancing the night away anywhere he found a dance floor. His love for the outdoors and music were only surpassed by the love he had for his family and the Chicago Bears, Cubs, and Bulls. Jason loved his in laws, grandmas, cousins, nieces, nephews, aunts, uncles, and countless friends that were like family to Jace. The relationship he had with his wife and kids was like no other. They shared an unbreakable bond. Jason always said that being “Daddy” to his children and wife was the best job ever and took it very seriously. Jace spent his time supporting his son playing sports, his daughter Harley cheering, and his youngest Jacelyn is a mini-me of him. Providing for his family and giving them the Aleman Ranch was very special for him and something he was very proud of surrounded by his loving dogs, cats, and chickens. Jason was selfless and put others first. He was fun loving, outgoing and usually the life of the party. To know him was to remember him forever, Jason was one in a million and will be missed dearly. When you think of Jason, celebrate the good memories you have of him. Remember that life is fragile and short and should be lived to the fullest and in the present not after death. Jason would tell you to capture moments with pictures, once a moment is gone forever it is impossible to reproduce. He will be missed more than any words could express but he will be forever in our hearts till we meet again.

Jason Anthony Aleman went to his heavenly home on January 30th 2022 in Mentone, Texas as the result of an automobile accident. He was 36. Jason worked in the oilfield industry for twelve years. Jason, Jace, J, Poppa, or Daddy as he was called... View Obituary & Service Information

The family of Jason Anthony Aleman Sr. created this Life Tributes page to make it easy to share your memories.