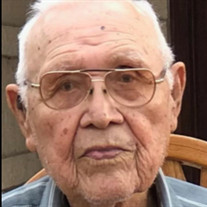 MISSION- Born October 8, 1922 died September 15, 2021 surrounded by his loving family. He is survived by his wife of 74 years Virginia de Rueda Piñón, Daughters Diana Nield, Pleasant Grove, UT, Linda Wyatt (Rodney) Harrah OK, Judy Haynes, Phoenix, AZ and sons Joe M, Mission, TX, Joel Daniel (Karen) Gilbert, AZ, Lauro “Larry” Mission, TX,16 grandchildren, and 29 great-grand children. He was preceded in death by his parents, son Ascención, brother Miguel, Mission, TX sisters, Lupe Mata, Kingsville, TX, Celia Pena, Luke, TX, “Quita” Galvan, San Benito, TX and son-in-laws Keary Nield & Reggie Haynes, Dad was a stoic, brave man who lived a long life, living it the way he wanted to with out regrets. One of the bravest thing the did was married our Mom, Virginia R Piñón who he remained married for 74 yrs with a few breaks in between. They had 6 children. He was 3 weeks shy of his 99th birthday. Before COVID took effect he was busy man. He drove himself to the grocery store, gas station, restaurants, wherever he felt he needed to go. He balanced his check book every month. He ensured my mother had what she wanted. And he kept his children in line, (all 6 of us). He was a WW II veteran, Army Air Force. A member of the Hispanic Baseball league, a running back for Tom Landry when they were in High School, and a Civil Servant for 42 yrs. One of his great passions was Golf. He died peacefully surrounded by his family either present or by phone. He will be greatly missed. There are many stories of my dad floating around from his youth and some are documented in Mission, TX Museum. In the 1930’s he played football with Tom Landry, Dallas Cowboys long time coach, wearing Mission Eagles jersey #70. It was rumored Tom asked Dad to be his equipment manager at one time and dad refused as he felt he had a better retirement plan as a civil servant. In 1942 days’s after this 20th birthday he joined the military , Army Air Force fighting in WW II. He received the American Theater Medal, Victory Medal, Asiatic-Pacific Theater Medal and a Good Conduct Medal. He was released in 1946. In 1947 he played with Mission 30-30 Semi-Professional Baseball Team. Where story is that he met mom and they were married October 1947. He got his nickname “Joe” when he boxed in his youth and was referred to as another “Joe Louis”. After marrying mom he held several jobs until he was hired at the Naval Air Station in Corpus Christi, TX as an Aircraft Mechanic (a trade he learned in the Military). He continued in this field until his retirement in 1989, stationed in Harlingen Air Force Base, Laredo Airforce Base, and retiring at Williams Airforce Base in Chandler, AZ. Not only did he perform his profession with pride but was a Stewart with his union and continually stayed active in protecting workers rights. He loved Golf, participated in many tournaments through this lifetime, playing with his sons Larry and Joe, Colonels and Winter Texan . Winning enough price monies to repaint his house and pay for many of his “fun” times! These are his earthly accomplishments. The greatest gift we received from our Dad was his bravery, his determination to seek a different life for his family, to make a difference in life by living his life on his terms! He provided a patriarchal belief that we seek continued education, emotional growth, fighting injustices and paving a new path for those who wanted to achieve more then was available to them in a prejudicial world. Continually being his authentic self and not worrying what other people thought of him. Sammy Davis’s song describes my Dad: "Whether I'm right or whether I'm wrong Whe want to live, not merely survive And I won't give up this dream Of life that keeps me alive I gotta be me, I gotta be me The dream that I see makes me what I am I want to live, not merely survive And I won't give up this dream Of life that keeps me alive I gotta be me, I gotta be me The dream that I see makes me what I am He was truly loved by his wife and family. He will be missed especially by all those businesses he frequented till the day he couldn’t.

The family of Ines "Joe" Piñon created this Life Tributes page to make it easy to share your memories.