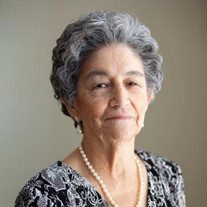 Mrs. Ester Rodriguez, 89, entered into eternal rest and the presence of her Lord and Savior Jesus Christ, Monday December 6, 2021. She was born May 26, 1932 in Mission, Texas. She was a homemaker and a faithful servant in the service of her Lord . Queen Ester, as she was lovingly called by her family and friends, along with her late husband, Jacinto Rodriguez were early pioneers of what is now the city of Alton. She served as a church deaconess and Church Representative for El Templo Biblico Independent Baptist Church in Alton for many years. She was a faithful wife and a loving mother, grandmother and great grandmother. She was a champion for education, which she instilled in all her children, grandchildren and great grandchildren. She will be dearly missed, but we have the blessed assurance that she is praising the Lord and that we will one day see her in that heavenly mansion. She was preceded in death by her parents, Adeliado Cortez and Maria Quintanilla, her brothers Jose & Nemencio Cortez, and her husband Jacinto C. Rodriguez. Mrs. Rodriguez is survived by her 7 children, Maria R. (Javier) Salinas, Adelaido (Sandra) Rodriguez, Lupita R. (Rolando) Garcia, Tila R. (Ramon) Ruiz, Maria Evangelina (Juan) Rodriguez, Ricardo Rodriguez and Raul (Berta) Rodriguez; one sister Felicitas San Miguel from Seattle Washington, Toribio Cortez from Redwood City, Ca. Adrian Cortez from Houston, Tx and Rafael Cortez from Burleson, Tx. Visitation will be held from 1-9:00 P.M. with a Christian service at 7:00 P.M. Monday, December 13, 2021 at Ric Brown Funeral Home in Mission. Funeral services will be held at 12 P.M., Tuesday, December 14, 2021 at El Templo Biblico with Pastor Jesse Trevino officiating. Eulogy will be given by Raul Rodriguez. Interment will follow at 3 P.M. at Valley Memorial Gardens in McAllen. Pallbearers will be Adelaido Rodriguez, Ruben Garcia, David Ray Ruiz, Josue Daniel Rodriguez, Ivan Rodriguez, and Raul Rodriguez. Honorary pallbearers will be Adalberto Rodriguez and Jacob Ruiz. Funeral arrangements are under the direction of Ric Brown Funeral Home of Mission

Mrs. Ester Rodriguez, 89, entered into eternal rest and the presence of her Lord and Savior Jesus Christ, Monday December 6, 2021. She was born May 26, 1932 in Mission, Texas. She was a homemaker and a faithful servant in the service of her... View Obituary & Service Information

The family of Ester Rodriguez created this Life Tributes page to make it easy to share your memories.

Mrs. Ester Rodriguez, 89, entered into eternal rest and the presence...