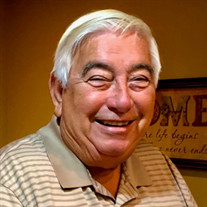 David Francisco Chapa was called to his heavenly home on Monday, August 23, 2021 in McAllen, Texas, surrounded by his loving wife, Rosario and his two children, Dave and Jennifer who loved him dearly. David was born on August 9, 1948 in La Blanca, Texas to parents, Octavio and Rafaela Chapa. He was one of five children and enjoyed the spoils of being the youngest born. His devotion to our Lord and commitment to his faith was instilled in him at a very early age. He faithfully attended Sacred Heart Catholic Church in Edinburg, Texas, where he routinely woke at 5 a.m. to celebrate Mass and serve as an altar boy. Growing up in Edinburg, he often joined in to help run the gas station where his father worked. He spent many hours learning various skills from his father that he would carry with him throughout his life. David was 15 when his father unexpectedly passed away, at which point he assumed his father’s responsibilities at the gas station. David used this time to hone his skills and served as the lone operator of the service station until the owner sold the business. He was soon recognized as a young man with skills and acumen beyond his years. It was through this work and his display of maturity where he would earn the respect of the local business community. David graduated from Edinburg High School in 1968 and went on to join the Army Reserves that same year. While in the Army he attended college at Pan American University. David always carried himself with dignity, humility, and respect, and he maintained it was an honor to have served his country. In 1972 he met the love of his life, Rosario Arellano at a party hosted by her parents. It was love at first sight, and David spent the next several months meeting up with her at group gatherings until summoning the courage to call and ask her out on a date. He took Rosario dancing. From that moment he knew this was the girl for him. He soon asked her for her hand in marriage and they joyfully married in January of 1973.David spent many years as a manager of the automotive center at Montgomery Wards before branching out to become an independent business owner. He owned and operated both a NAPA Auto Parts store as well as Leisure Time Pools. He ultimately sold the auto parts store and continued solely with his pool business, which allowed him to work outside and with his hands as he was so mechanically inclined. He was known to be able to take apart just about anything and put it back together in working order. A former member of the Order of Alhambra #260, he served as its past Mosara Grand Commander. He was also an active member of the COPA social group, hosting many holiday gatherings and enjoying time spent with his COPA compadres. He also served as former president of the Board of Directors at Long Island Village Seaside Living Community. David’s hobbies included traveling, RVing, spending time with his grandkids, tinkering with gadgets and helping his community. He spent many weeks traveling across the US with his family and enjoyed cross country RV caravanning with his brothers. David was not only a curator of memories, but also a wonderful narrator of his family’s history and enthusiastically passed his family’s legacy down to his children and grandchildren. He is survived by his loving wife, Rosario Chapa; son, David (Valerie) Chapa, Jr.; daughter, Jennifer (Robert) Saenz; grandchildren, Darron Saenz, Nicholas Saenz, Gabriella Saenz, Katie Chapa; brothers, Octavio (Mary) Chap, JR., Joel (Lorna) Chapa, Alberto (Eva) Chapa; numerous nieces and nephews; and loving dog Rocky. He is preceded in death by his grandson, Robert Christian Saenz; parents, Octavio and Rafaela Chapa; and sister, Blanca Chapa pinner. Pallbearers will be David Chapa (son), Robert Saenz (son-in-law), Darron Saenz (grandson), Albert Chapa (nephew), Hector Chapa (nephew), Eduardo Chapa (nephew), with Honorary pallbearer: Nicolas Saenz (grandson). Funeral arrangements are being handled by Ric Brown Family Funeral Home, 621 E. Griffin Parkway in Mission, Texas. Visitation will be Monday, August 30, 2021 from 3-9 pm with a same day Rosary from 7-8pm. Funeral Blessing will be at 10:30am, Tuesday, August 31, 2021 at Our Lady Guadalupe Catholic Church, 620 N. Dunlap Ave in Mission, Texas. Burial to follow at 11am., Tuesday, August 31, 2021m at Laurel Hill Cemetery. 805 Rankin St, Mission, Texas. For your safety and for the safety of the Chapa Family, they request everyone adhere to the U.S. Centers for Disease Control and Prevention guideline for social distancing and mask wearing.

David Francisco Chapa was called to his heavenly home on Monday, August 23, 2021 in McAllen, Texas, surrounded by his loving wife, Rosario and his two children, Dave and Jennifer who loved him dearly. David was born on August 9, 1948 in La Blanca,... View Obituary & Service Information

The family of David Francisco Chapa Sr created this Life Tributes page to make it easy to share your memories.

David Francisco Chapa was called to his heavenly home on Monday,...