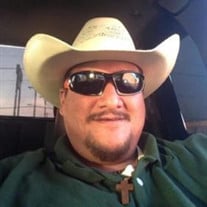 Performing in his best karate gala, Sensei Daniel (Danny D. Davila) debuted into the Heavenly dojo of the Lord’s karate tournament on November 21, 2021. Danny was born on August 23, 1970 to Robert Davila Sr. and Gloria Melda Cavazos-Davila in Laredo, Texas. Greeting him in Heaven are his dad, Robert Sr., his siblings Robert Jr. and Debbie Davila. Keeping his memories alive are his loving mother, his devoted sister, Cynthia (Eddie) Alejos, his precious daughter, Angelica (Dillon) Westall and his grandsons, Braxton and Myles Westall. Additionally, he leaves behind the love of his life, Orfa Inocencio and his son and little shadow, Joey. To remember his joking, playful manner are his nieces and nephews, Debbie Alejos (Aldo Hernandez), Eddie Alejos Jr., Danny Alejos, Andy Alejos, Becca Alejos, Robert Jesus Davila, Ethan Davila, Rocky Davila, and his adoring “grandson” Aiden Hernandez. Furthermore, he leaves behind many primos and tios and other family members and friends. Known as “Dad”, “Mijo”, “Babe”, “Piglet”, “Tio”, “Grandpa” “Friend”, “Big Man Dan”, and his favorite “The Freight Train”, Danny was just an adorable, joking, playful soul who lived life on his own terms and took advantage of all it had to offer. His passion was karate and reached his goal to become a Sensei black belt and a state champion winner. At times, he served as a karate instructor. In spite of his health issues, he managed to participate in all of his karate activities and inspired and influenced many other people. He loved his alma mater the Laredo Nixon Mustangs and its tailgate gatherings. To accompany him to his final resting place are his pallbearers: Eddie Alejos Jr., Danny Alejos, Andy Alejos, Joey Inocencio, Dillon Westall, and Ricky Cavazos. Honorary pallbearers are Debbie Alejos, Aldo Hernandez, Aiden Hernandez, Becca Alejos, Robert Jesus Davila, Ethan Davila, Braxton Westall, Myles Westall, Yvonne Rojas, Manny Rojas, Joey Rios III, Omar Cavazos, Leroy Cavazos, and Melissa Davis. Funeral arrangements are as follows: viewing, rosary, and mass will be held at Our Lady of Guadalupe Catholic Church in Mission, Texas followed by burial at Valley Memorial Cemetery under the direction of Ric Brown Funeral Home in Mission. Our heartfelt gratitude goes to the doctors and staff at DHR for doing all they could during all of his hospital care. In addition, we would like to thank Dr. B. Marek, Dr. A. Kaplan, Dr. L. Rios, Dr. S. Sahay, Dr. R. Rafols, Dr. Ruben Abreu, Dr. E. Garcia, and Dr. M. Gonzalez. This “freight train” was filled with love, pain, laughter, and tears until it reached its final destination. And for this, he wants to thank every passenger who rode on his train.

The family of Danny David Davila created this Life Tributes page to make it easy to share your memories.