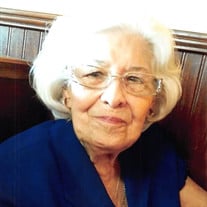 Mission------- Carmela Chapa, 98, was called to her eternal rest by our Lord on March 26,2022. Carmela was born on November 4, 1923 in Mission, Tx, to Froilan Gonzalez and Virginia Recio de Gonzalez. She was preceded in death by her parents,her beloved husband Amancio Jose and son Carlos. Also preceding her were her brothers Gilberto, Froilan, Jose Reynaldo, and sisters Victoria, Rene, and Virginia, all who are now reunited with her. She was a proud descendent of Patricio Perez, who was a sergeant in the Union Army during the U.S. Civil War and a pioneer Valley rancher..Carmela and Amancio met while in high school, she in Mission, he in La Joya.They made plans to marry, but their future together appeared to be jeopardized when on September 12 of1944, after a bombing run over Germany, Amancio and the bomber crew he served with were reported “missing in action” . Happily they married on 24 June 1945. Upon Amancio’s passing in2000, they had been married 55 years. Carmela devoted her entire life to ensuring the welfare and happiness of her family as wife, mother, grandmother, great-grandmother, and great-great grandmother. In the 60s she suffered in the knowledge that her sons Jaime and Carlos were on the front lines in Viet Nam. Her strong faith in God and her prayers carried her through that fearful time. Her love of children led her to work in childcare services and education with Head Start, in the La Joya area, and then much later, in Green Bay, Wisconsin, where she and Amancio and their youngest son Tony lived fourteen years. It was in Green Bay that she was offered the opportunity, at a local community college, to teach a class on Tex-Mex Cooking, something she thoroughly enjoyed and was very proud of. Upon returning to the Valley to retire they settled in Tierra Blanca and then Mission. It was in Mission that she became active in the Damas Catolicas and the Hobby Club, with her long time friend, Emma Treviño. She and Emma were avid Cowboy fans. When going out to Sunday Mass or any special occasion, our mother was meticulous about what she wore. She was a stickler for style and proper color coordination. Carmela and Amancio liked taking trips into Mexico and attending the Christmas Festival of Lights in San Antonio. It was on one of their trips to Monterrey, that she lost the love of her life when Amancio suffered a fatal heart attack. Up into her early nineties she was active and independent and enjoyed attending Sunday Mass and listening to Fr. Roy’s sermons. Carmela and Amancio were the loving parents of five children, Amancio Jose (Cissy), Jaime(Rosa), Yolanda (Juan), Carlos (Theresa), and Antonio (Lisa). They also were blessed with 14grandchildren, 39 great grandchildren, and 9 great great grandchildren. Our family expresses its heartfelt appreciation to our mother’s caregiver, Rosa Garcia, for her companionship and support, also a special thanks to her wonderful neighbors Delia and Daniel Ryan for their visits and many acts of kindness over the years. Words can not express our love and gratitude for our mother’s dearest friend, Emma Treviño.

Mission------- Carmela Chapa, 98, was called to her eternal rest by our Lord on March 26,2022. Carmela was born on November 4, 1923 in Mission, Tx, to Froilan Gonzalez and Virginia Recio de Gonzalez. She was preceded in death by her parents,her... View Obituary & Service Information

The family of Carmela Chapa created this Life Tributes page to make it easy to share your memories.