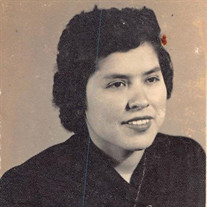 Mrs. Adelia Mendoza, 89, entered eternal rest surrounded by her loved ones at her residence in Mission, TX on March 13, 2022. She was born August 18, 1932, to Zolferino and Eufemia Munguia. She graduated from Mission in 1956 and married the love of her life Mario Mendoza on April 17, 1960. Next month would have been their 62nd anniversary. She worked at McAllen Medical for 24 years. She was a faithful wife, mother, grandmother, and great grandmother. She was preceded in death by her parents, Zolferino and Eufemia Munguia, her brothers Gilberto, Inocensio, Eliodoro Munguia, her sister Felipa Munguia and great grand-daughter Sky Espinoza. Mrs. Mendoza is survived by her husband Mario Mendoza, her daughters Nivea (Isidro) Herrera, Sonia Mendoza, Aracelia (David) Jaime; one sister Herminia Anzaldua, brothers Jose (Isabel) Munguia, Zolferino (Linda) Munguia, Federico (Rosario) Munguia, Eugenio (Elvia) Munguia, her grandchildren Ysela (Joshua), Mario Herrera, Jesse (Melissa) Espinoza, Brenda (Elias), Jami (Brayan) Jaime, great grandchildren Leonor, Rowen, Chris, Caleb, Cassidy, Emmett, Joaquin, Cruz, Roman, and Bryan. “Mother” as we all lovingly called her will be greatly missed, but all our memories and wonderful times we spent together will remain in our hearts. Visitation will be Wednesday March 23, 2022, at 4:00 pm and the Rosary will be at 7:00 pm. Church Mass will be March 24, 2022, at 12:00 pm at Guadalupe Church in Mission, Tx. Interment will follow at Valley Memorial Gardens in McAllen, Tx. Pallbearers will be Mario Herrera, Jesse Espinoza, Rowen Espinoza, Isidro Herrera, David Jaime, and Arturo Mendoza. Honorary Pallbearers will be Joshua Lykins and Elias Ramirez. Funeral Arrangements are under the direction of Ric Brown Funeral Home of Mission.

Mrs. Adelia Mendoza, 89, entered eternal rest surrounded by her loved ones at her residence in Mission, TX on March 13, 2022. She was born August 18, 1932, to Zolferino and Eufemia Munguia. She graduated from Mission in 1956 and married the... View Obituary & Service Information

The family of Adelia M. Mendoza created this Life Tributes page to make it easy to share your memories.